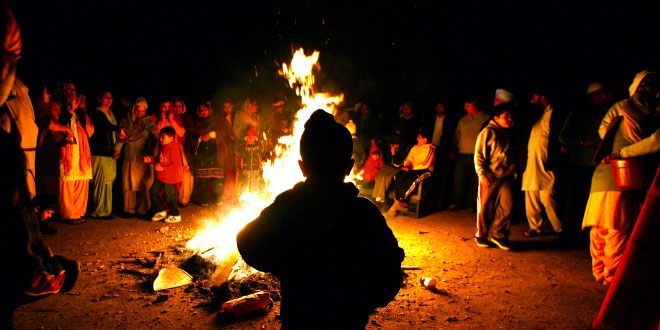 Lohri Greetings For Students And Children: The day begins with children collecting money from houses in the neighborhood. Children go from door to door singing songs in praise of Dulha Bhatti, a Punjabi version of Robin Hood who robbed the rich and helped the poor. These “visitors” are given either money or gajak, til bhuga, moong phali, gur and rewri. In the evening, a bonfire is lit, winter savories are served around the bonfire and everyone gathers around it. Munchies, collected from each house, are thrown into the fire. There are varieties of cards available on the occasion of Lohri, have a look.

There are many folklores about Lohri. Lohri is the celebration of the arrival of longer days after the winter solstice. According to folklore, in ancient times Lohri was celebrated at the end of the traditional month when winter solstice occurs. It celebrates the days getting longer as the sun proceeds on its northward journey. The day after Lohri is celebrated as Maghi Sangrand.

In its origins, Lohri is an ancient mid winter Hindu festival, in regions near the Himalayan mountains where winter is colder than the rest of the subcontinent. Hindus traditionally lit bonfires in their yards after the weeks of the rabi season cropping work, socialized around the fire, sang and danced together as they marked the end of winter and the onset of longer days. After the night of bonfire celebrations, the Hindu would mark Makar Sankranti and go to a sacred water body such as a river or lake to bathe.