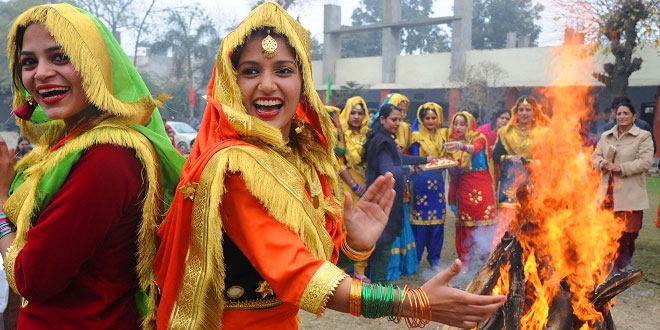 Lohri History: The history of Lohri, a seasonal festival of North India is as old as that of story of Indus Valley civilization itself. The Festival of Lohri marks the beginning of the end of winter and the coming of spring and the new year. The fires lit at night, the hand warming, the song and dance and the coming together of an otherwise atomized community, are only some of the features of this festival. The Lohri of North India coincides with Pongal in Tamil Nadu, Makar Sankranti in Bengal, Magha Bihu in Assam, Thai Pongal in Kerala, all celebrated on the auspicious day of Makar Sankranti.

There are some interesting socio-cultural and folk-legends connected with Lohri. According to the cultural history of Punjab, Bhatti, a Rajput tribe during the reign of Akbar, inhabited parts of Rajasthan, Punjab, and Gujarat (now in Pakistan). Dulla Bhatti, Raja of Pindi Bhattian, was put to death by the Mughal king for revolting against him. The tribal mirasis (street singers) trace the history of the tribe and interestingly, claim Maharaja Ranjit Singh as one of its scions.

Dulla Bhatti, like Robin Hood, robbed the rich and gave to the poor. The people of the area loved and respected him. He once rescued a girl from kidnappers and adopted her as his daughter. His people would remember their hero every year on Lohri. Groups of children moved from door to door, singing the Dulla Bhatti folk-song: “Dulla Bhatti ho! Dulle ne dhi viyahi ho! Ser shakar pai ho!” (Dulla gave his daughter a kilo of sugar as a marriage gift).

Lohri is essentially a festival dedicated to fire and the sun god. It is the time when the sun transits the zodiac sign Makar (Capricorn), and moves towards the north. In astrological terms, this is referred to as the sun becoming Uttarayan. The new configuration lessens the ferocity of winter, and brings warmth to earth. It is to ward off the bitter chill of the month of January that people light bonfires, dance around it in a mood of bonhomie and celebrate Lohri.

Fire is associated with concepts of life and health. Fire, like water, is a symbol of transformation and regeneration. It is the representative of the sun, and is thus related, on the one hand with rays of light, and on the other with gold. It is capable of stimulating the growth of cornfields and the well being of man and animals. It is the imitative magic purporting to assure the supply of light and heat. It is also an image of energy and spiritual strength. That is why the Lohri fire gets sanctified and is venerated like a deity. On this occasion, people offer peanuts, popcorn and sweets made of til- chirva, gajak and revri – to propitiate fire as a symbol of the sun god.

Previous What is the Bonfire Ritual in Lohri Festival?
Next Bonfires and Bonhomie: Lohri, Pongal, Makar Sankranti