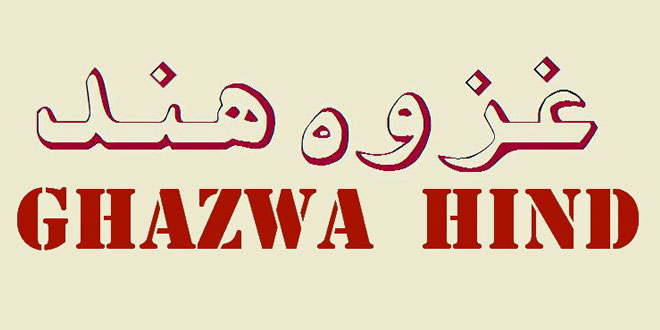 What is Ghazwa-e-Hind? Islam’s Prophetic War against India

As per Tarek Fatah:

The issue of ‘Ghazwa-e-Hind’ (Islam’s Prophetic War against India) came up for discussion on my new talk show in India on Zee News. Two facts emerged: First Islamic clerics didn’t wish to discuss the subject, and then Hindus of India knew next to nothing on this subject.

Before I explain this controversial doctrine that is based on a Hadees (saying) of Prophet Muhammad, it is worth nothing that Indian politicians and academics, as well as men and women of the military, have remained confounded at what they see as the irrational urge among Pakistan’s Military-Mullah Establishment to provoke a war with India despite repeated defeats in 1947-48, 1965, 1971, and 1999.

The answer may be in this 2011 lecture by a prominent Islamic cleric and former banker Irfan-ul-Haq as he explains the genesis of Pakistan being the prophesied defeat of India and Hinduism at the hands of Pakistan in what is known in the Hadith (Hadees) literature as the ‘Ghazwa-e-Hind’ or the Prophet’s War on India.

The cleric tells his enthralled audience that Pakistan came about for the sole purpose of being the springboard of the end-of-times ‘Ghazwa-e-Hind’ when Pakistan’s military and people will swarm India and wipe out once and for all the practice of Hinduism from the face of the earth.

He says, only then will the armies of Islam march to meet the reincarnation of Jesus Christ in Syria from where Europe will be conquered and once that is done, human civilization will end on the prophesized day of Qayamat (Qayama in Arabic, the end of times

Lecture on Ghazwa-e-Hind in English

Here is another explanation by another Islamic cleric, this time from the Caribbean, speaking in English. This fellow uses clever doublespeak to not only use the lecture about ‘Ghazwa-e-Hind’ to spread hatred against Hindus, but also against Jews and Israel while provoking Pakistan Army to be even more radical and anti-India than they already are, taunting them to go further.