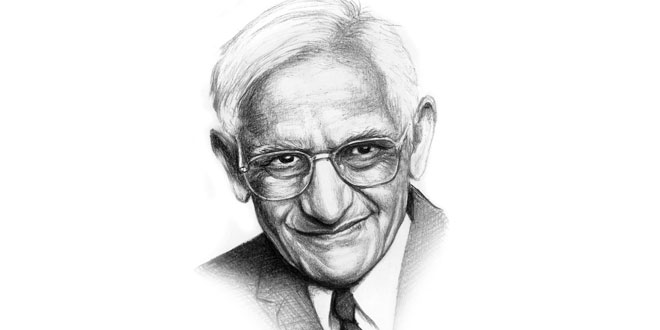 Har Gobind Khorana was born of Hindu parents in Rajpur, a little village in Punjab, which is now part of West Pakistan. The correct date of his birth is not known; that shown in documents is January 9th, 1922. He is the youngest of a family of one daughter and four sons. His father was a patwari, a village agricultural taxation clerk in the British Indian system of government. Although poor, his father was dedicated to educating his children and they were practically the only literate family in the village inhabited by about 100 people.

Har Gobind Khorana attended D.A.V. High School in Multan (now West Punjab); Ratan Lal, one of his teachers, influenced him greatly during that period. Later, he studied at the Punjab University in Lahore where he obtained an M. Sc. degree. Mahan Singh, a great teacher and accurate experimentalist, was his supervisor.

Khorana lived in India until 1945, when the award of a Government of India Fellowship made it possible for him to go to England and he studied for a Ph. D. degree at the University of Liverpool. Roger J. S. Beer supervised his research, and, in addition, looked after him diligently. It was the introduction of Khorana to Western civilization and culture.

Khorana spent a postdoctoral year (1948-1949) at the Eidgenössische Technische Hochschule in Zurich with Professor Vladimir Prelog. The association with Professor Prelog molded immeasurably his thought and philosophy towards science, work, and effort.

After a brief period in India in the fall of 1949, Khorana returned to England where he obtained a fellowship to work with Dr. (now Professor) G. W. Kenner and Professor (now Lord) A. R. Todd. He stayed in Cambridge from 1950 till 1952. Again, this stay proved to be of decisive value to Khorana. Interest in both proteins and nucleic acids took root at that time.

A job offer in 1952 from Dr. Gordon M. Shrum of British Columbia (now Chancellor of Simon Fraser University, British Columbia) took him to Vancouver. The British Columbia Research Council offered at that time very little by way of facilities, but there was «all the freedom in the world», to use Dr. Shrum’s words, to do what the researcher liked to do. During the following years, with Dr. Shrum’s inspiration and encouragement and frequent help and scientific counsel from Dr. Jack Campbell (now Head of the Department of Microbiology at the University of British Columbia), a group began to work in the field of biologically interesting phosphate esters and nucleic acids. Among the many devoted and loyal colleagues of this period, there should, in particular, be mention of Dr. Gordon M. Tener (now a Professor in the Biochemistry Department of the University of British Columbia), who contributed much to the spiritual and intellectual well-being of the group.

In 1960 Khorana moved to the Institute for Enzyme Research at the University of Wisconsin. He became a naturalized citizen of the United States. As of the fall of 1970 Khorana has been Alfred P. Sloan Professor of Biology and Chemistry at the Massachusetts Institute of Technology.

Har Gobind Khorana was married in 1952 to Esther Elizabeth Sibler, who is of Swiss origin. Esther brought a consistent sense of purpose into his life at a time when, after six years’ absence from the country of his birth, Khorana felt out of place everywhere and at home nowhere. They have three children: Julia Elizabeth (born May 4th, 1953), Emily Anne (born October 18th, 1954), and Dave Roy (born July 26th, 1958).

Previous What is a pink elephant? Kids Social Science Q&A
Next What is Ghazwa-e-Hind? Islam’s Prophetic War against India