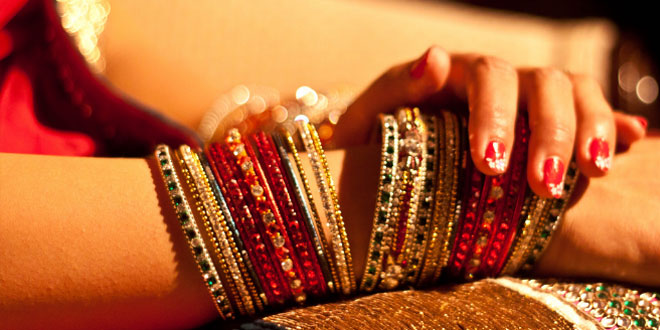 Though traditionally considered to be a symbol of suhaag for married women, colored glass bangles also hold a huge appeal for unmarried women. A lot of young women and girls like to accessories their outfits with such bangles, especially on festive occasions. The festival of Karwa Chauth sees the markets of Delhi flocked by women who want to buy glass bangles.

Famous bangles manufacturer, Anil Bhai Churiwala of Tri Nagar, had introduced bangles made according to Vaastu! He said, “This is the first time that such bangles have been manufactured in India.” The workers face particular directions when making these bangles. When asked about the popular designs in bangles this year, Anil said, “The most popular ones remained the Kundan, Sikuksi, Rajwara and Siroski bangles. Newly-weds went for Siroski – a glass coated chura which is made beautiful by its finishing. Rajwara bangles give one a royal look and are inspired by the bangles that used to be worn by erstwhile queens. So they also sold a lot.”

Babu Churiwala of Lajpat Nagar is the seventh generation of his family which is involved in manufacturing glass bangles. The first shop owned by them was in Ballimaran in Chandni Chowk and was established during the time of the British rule, but now it has been converted into an office. He says that bangle designs inspired by TV serials like Balika Vadhu and Na Aana Is Des Ladoo are also high in demand. “Since it is Karwa Chauth, bangles by the name of Sada Suhagan sold like hot cakes,” Babu said. He added that designs that were in fashion almost 200 years back are making a comeback now. Babu claims to have supplied bangles for the character of Basanti (played by Hema Malini) in Sholay.

Manju Goel of Neemri Colony, who was out shopping for Karwa Chauth, said that she bought bangles in red and burgundy colors as they would match with her saree that she will wear for the occasion. Anju Saxena of Janakpuri says that gold bangles are a woman’s prized possession, but glass bangles mark this festive occasion as they stand for a woman’s suhaag or her husband. Vandana of Gandhi Nagar was happy that she could pick up designer bangles which are normally not available during the rest of the year.