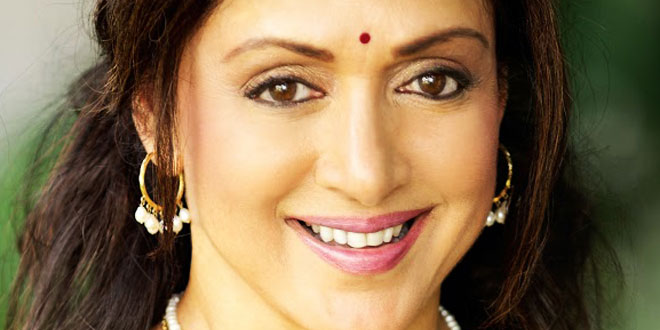 Hema Malini, (born October 16, 1948 in Ammankudi, Tamil Nadu, India) is an Indian actress and Bharatanatyam dancer, who starred in several successful Bollywood films in the 1970s, most notably the extremely successful Sholay.

Hema Malini was educated at Andhra Mahila Sabha, Chennai, Hema first tried to enter films in 1964, but was rejected; Tamil director Sridhar said she had no star appeal. She persisted and found her niche in Bollywood. She debuted in a 1968 film Sapnon ka Saudagar (“The Dreamseller), playing a young teen opposite the ageing superstar Raj Kapoor. With Dev Anand in Johnny Mera Naam (1970), Hema became a top star and with Dharmendra in Seeta Aur Geeta (1972) she was the top female star in Bollywood and became one of the reigning divas of the Bollywood film industry. Her fans called her The Dream Girl of Bollywood (an allusion to her first film, and one of her big hits).

She starred in many movies throughout the 1970s and 1980s and is perhaps best remembered for her glamour, style, and accomplished classical dancing. She formed a hit pair with Dharmendra and the duo gave a number of hit movies. She also achieved some strong dramatic or comic moments in films like Trishul, Joshila, Lal Patthar, Seeta Aur Geeta, Sholay, Meera and Satte Pe Satta. She wore bell-bottom pant-shirts in films like Trishul and Joshila, which was uncommon for women of that time.

After having a back seat from films for a number of years in the 1990s and early 2000s, she has recently made a comeback of sorts. She co-starred with Amitabh Bachchan after two decades since they last appeared together in the successful film Baghban (2003), and played a cameo role (also opposite Bachchan) in the 2004 blockbuster Veer-Zaara. In both films, she played a beautiful , self-possessed, middle-aged married woman rather than the ingenue role of her earlier career.

She tried her hand at directing and made the 1992 film Dil Aashna Hai which featured an all-star cast including Shahrukh Khan and the late Divya Bharti.

She also directed and starred in the TV Serial Noopur, in which she was depicted as a Bharatanatyam dancer going to America.

Hema Malini is a dedicated Bharatnatyam artiste, a classical dance of India. Her two daughters have trained in the related Odissi school of dance, and the three have performed together at several charity dance concerts.

Top Bollywood stars like Sanjeev Kumar and Jeetendra proposed marriage to her, but she married Dharmendra (who never divorced his first wife) and they have two children: Ahana Deol and Esha Deol (born 1982), who is a successful Bollywood actress as well.

In 2005, on the TV show Koffee with Karan, she said that she taught her daughters Tamil very well, but had to hire a tutor to help her daughter Esha Deol learn Punjabi for a film. Apparently, Esha’s father Dharmendra, whose mother tongue is Punjabi, converses with Hema and his daughters only in Hindi and English.

She and her husband have been involved in politics, as members of the Bharatiya Janata Party (BJP). She was elected to the Rajya Sabha, the upper house of the Parliament of India, with the support of the BJP. In February 2004, she joined the party officially. With her film career less hectic, she has been an active member of the party, attending party meetings and rallies and campaigning for the party through various elections.

She has once said in an interview that she would never wear revealing outfits in movies, and has been true to her words. It is said that after she shot for a swimsuit scene in a movie, her mother was was so offended that she promised never to repeat it. She exposed her navel in a low-waist saree for the first time on camera only in 2006, after over 30 years of acting.