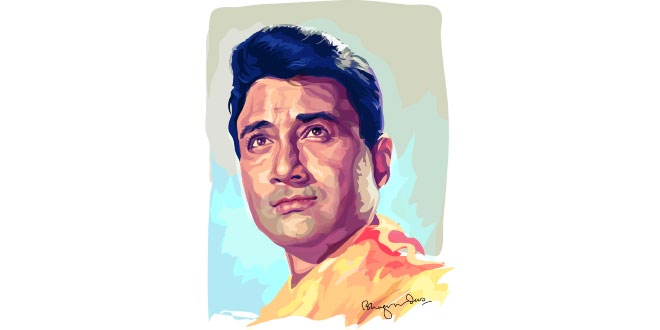 Dev Anand — Dharam Dev Anand (born September 26, 1923) is a famous Indian actor and film producer. His real name was Devdutta Pishorimal Anand. Dev Anand is one of the most popular stars the Hindi Film Industry has seen. In his heydays, he was considered the epitome of the suave, urban gentleman.

His elder brother Chetan Anand is credited to bringing him and younger brother Vijay Anand into the film world. Though he did launch his son Suneil Anand in films with Anand aur Anand, the film and Suneil did not get noticed.

Dev Anand was born in Gurdaspur in Punjab to a well-to-do advocate, Pishorimal Anand. He graduated in English literature from the Government College, Lahore (now in Pakistan). His love for acting made him leave his hometown. Dev began his career in the military censor office at Churchgate, Mumbai, for a princely salary of Rs 160. He was soon offered a break as an actor by Prabhat Talkies to star in their Hum Ek Hain (1946). While shooting for the film in Pune, Dev struck a friendship with fellow actor Guru Dutt. Soon, they were swapping shirts, double dating and sharing dreams. They made a pact: if Dev produced a film, Guru Dutt would direct it; if Guru Dutt produced a film, Dev would act in it.

Dev made the grade first. By a strange coincidence, Dev was offered his first big break by Ashok Kumar, his favourite star. Kumar spotted Dev hanging around in the studios and picked him as hero for the Bombay Talkies production, Ziddi, costarring Kamini Kaushal (1948). His first success came with Ziddi (1948).

In 1949, he turned producer and launched his own “banner” Navketan, which continues to churn out movies year after year. Though his maiden attempt at direction, Prem Pujari, flopped, his second directorial effort Hare Rama Hare Krishna in the 1970’s with Zeenat Aman was a big success.

Dev never looked back. He bought his first car, a black Hillman. His dream of working with his teenage idol, actress Snehprabha Pradhan, was also fulfilled.

As promised, Dev gambled on Guru Dutt as director for the crime thriller, Baazi (1951). The dice rolled in favour of this creative collaboration; the Sahir (Ludhianvi, lyricist) song, Tadbeer se bigdi huyee taqdeer bana de, proved prophetic and Dev became a true blue star. It also crystallised his image as an urban cowboy with more than his share of smarts.

At this stage, Dev was drawn towards grey-shaded roles and films with a noirish flavour, like Jaal (1952). He played a gambler, a smuggler, a black-marketed. The year 1954 was a crucial one. Dev was one of the earliest Indian stars to visit Russia. His starrers, Rahee and Aandhiyan, were screened there along with Raj Kapoor’s Awaara. In the same year, Taxi Driver was declared a hit. Dev’s heroine was Kalpana Kartik again, and the two decided to marry in a quiet ceremony during a lunch break on the sets!

Marriage and the birth of son Suneil in 1956 did not affect Dev’s draw. A rapidfire style of dialogue delivery, an array of hats (remember Aye meri topi palat ke aa?), and a penchant for nodding while speaking became Dev’s USP in films like Munimji, CID and Paying Guest.

His style was lapped up by the audience and was widely imitated. He starred in a string of box office successes for the remainder of the 1950’s and some of his hit films include Munimji, CID, Paying Guest, Gambler, Tere Ghar ke Saamne and Kaala Pani.

Sure, he had style, but Dev’s detractors cast aspersions on his acting abilities and questioned his inclusion in the hallowed Raj Kapoor – Dilip Kumar league. Dev made them eat humble pie with his class act in Kala Pani (1958), as the son who is willing to go to any lengths – including sweet-talking a courtesan into believing he is in love with her – to clear his framed father’s name. He won the Best Actor Award for the film.

He was romantically involved with singer-actress Suraiya and the two of them paired in six films together. During the shooting of a song, a boat capsized and Dev Anand saved Suraiya from drowning. She fell in love with him but her grandmother opposed the relationship. Suraiya remained unmarried all her life.

Dev Anand married film actress Kalpana Kartik in 1954. His first film in colour, Guide with Waheeda Rehman was based on the novel of the same name by R. K. Narayan. The impetus for making a film from the book came from Dev Anand himself, and he met and persuaded Narayan to give his assent to the project. Dev Anand tapped his friends in Hollywood to launch an Indo-US co-production that was shot in Hindi and English simultaneously and was released in 1965. This is regarded by many as his best work till date.

He followed it up with an interesting double role in Hum Dono (1961) as a mustachioed major and his clean-shaven lookalike.

Guide (1965), directed by younger brother Vijay Anand, silenced the staunchest of critics. Dev played Raju, a voluble guide who supports Rosy (Waheeda) in her bid for freedom; but is not above thoughtlessly exploiting her for personal gains. Combining style with substance, Dev gave an affecting performance as a man grappling with his emotions in his passage through love, shame and salvation.

Guide was Dev’s creative acme. He reunited with Vijay Anand for the much-hyped Jewel Thief, featuring a bevy of beauties led by Vyjayanthimala, including Tanuja, Anju Mahendru, Faryal and Helen.