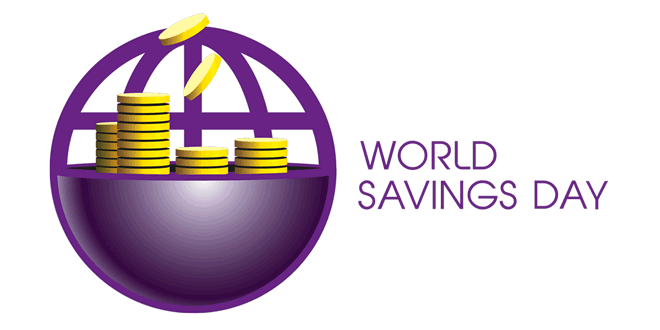 World Savings Day (WSD) is an event created to increase the public’s awareness of the importance of savings both for modern economies and for individuals alike. Savings is important in the global economy and every depositor contributes to its development.

For more than 90 years, the World Savings and Retail Banking Institute and its members have spearheaded annually a day dedicated to promoting the virtue of people saving money. Called WSD, it was the first initiative of WSBI, the voice of savings and retail banks in close to 80 countries, the day remains relevant for members who engage actively in celebrating in their local areas. World Savings Day is celebrated in countries around the world.

For Brussels-based World Savings and Retail Banking Institute and its members, WSD places added focus on the stabilizing role played by savings and retail banking in the overall financial system. It evokes some of the ethos of local banks: responsible partners in communities, close to the customer, serving households, small and medium-sized firms (SMEs) and local authorities. ​WSBI member banks demonstrate their locally focused approach to banking through World Savings Day activities in the communities they serve.

WSD or World Thrift Day was established to inform people all around the world about the idea of saving their money in a bank rather than keeping it under their mattress.

There had been some examples of days that were committed to the idea of saving money to gain a higher standard of life and to secure the economy. For example, the first national thrift day ​was celebrated in 1921. In other countries, such as Germany, peoples’ confidence in savings had to be restored because many ​people didn’t even think of saving since they had lost close to everything in the German monetary reform of 1923.

After the Second World War, World Thrift Day continued and reached the peak of its popularity in the years between 1955 and 1970. It became a veritable tradition in certain countries. In Austria, for instance, the official mascot of saving, the so-called ‘Sparefroh‘ (literally: ‘Happy Saver‘) reached a higher degree of brand awareness than the republic’s President and even a street was named after him. In the 1970s the ‘Sparefroh-Journal’, an educational magazine for younger people, reached a circulation of 400,000 copies.