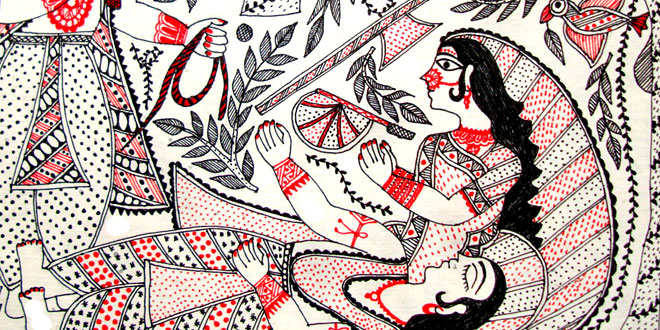 Karwa Chauth Legends in Hindu Culture – Karwa Chauth is the festival that holds a lot of significance for married Hindu women, who keep a fast for the long life of their husband, on this day. Though the basic aim behind the festival remains the same, the particular customs and rituals may vary a bit, depending on the region to which the women belong. Karva chauth has a tremendous social and cultural significance in India. It has a rich background and has several stories related to its existence. Some of the popular stories and legends associated with the festival have been described below:

A beautiful girl Veeravati, the only sister of her seven loving brothers, got married to a king. On her first karwa chauth, she went to her parents’ house and a strict fast, waiting for the moon rise to break it. The seven brothers could not see their loving sister go hungry throughout the day. They decided to end her fast, by reflecting a mirror through peepal tree leaves and making her believe that it is moon. The sister fell for it and broke the fast. The moment she ate food, she got news of her husband’s serious illness.

After coming to know that her husband is not well, she rushed to her palace and on her way, met Lord Shiva and Goddess Parvati. It was them that she came to know that her brothers had shown her false moon and made her break her fast before moon rise. The queen asked for forgiveness and was granted the boon that the king would be revived only if she undertakes seven karwa chauth fast strictly, following all the rituals. The queen agreed and strictly followed all the rituals of karwa chauth the next seven times and got her husband back.

Karwa Chauth also has a story dating back to the pre-Mahabharata times. Draupadi used to observe this fast after her marriage. It so happened that once Arjun went to the Nilgiris for penance and in his absence, the rest of the Pandavas faced many problems. Draupadi asked Lord Krishna for help. The Lord reminded her about Goddess Parvati, who had sought Lord Shiva’s guidance under similar circumstances and was advised to observe the fast of Karva Chauth. Draupadi followed the instructions and observed the fast with all its rituals and the Pandavas were able to overcome their problems.

Another story related to karwa chauth concerns the Satyavan and Savitri. When Lord Yama came to take away Satyavan’s soul, Savitri begged him to spare her husband. He refused to do so. In order to gain back her husband’s life, Savitri stopped eating and drinking anything. Finally, Yamraj relented and granted her, her husband’s life. And from that day onwards, karva chauth has been celebrated with great faith and belief.