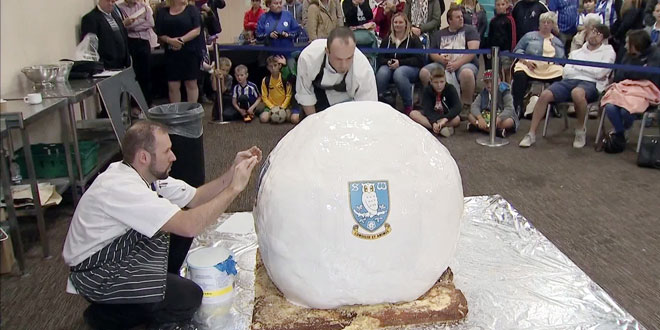 London, United Kingdom – September 6, 2017 – Sheffield Wednesday’s catering team used 612 pounds of flour, 610 pounds of butter, 610 pounds of sugar and 4,443 eggs to bake a 628-pound cake in the shape of a soccer ball to celebrate the team’s 150th anniversary and to set the new world record for the Largest cake ball.

Guinness World Records also recognized the world record for the largest wedding cake; it weighed 6.818 tonnes (15,032 lb) and was made by chefs at the Mohegan Sun Hotel and Casino, Uncasville, Connecticut, USA and displayed at their New England bridal showcase on 8 February 2004.

Head Chef Rob Cox of Sheffield Wednesday’s catering team used 612 pounds of flour, 610 pounds of butter, 610 pounds of sugar and 4,443 eggs to create the massive cake adorned with the team’s colors and logo.

Club Spokesman Trevor Braithwait said about 15,000 hungry fans visited the stadium to take part in the record and get their piece of the cake.

“The cake was really well received by all of our fans, with over a thousand queuing up in an orderly fashion to grab a slice,” he said. “Thanks to our fans we achieved the tall order and broke the record so it was a great success.”