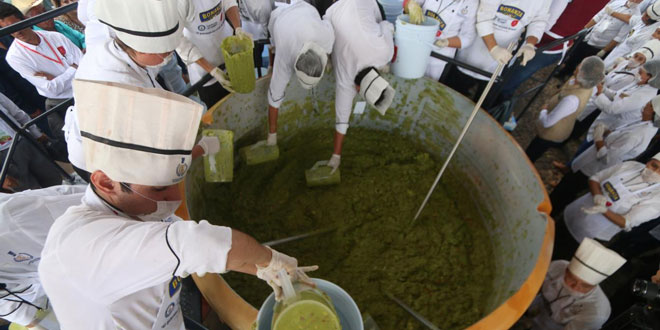 Concecepcion De Buenos Aires, Mexico – September 7, 2017 – Around 1,000 volunteers (600 students from a local culinary school and 400 people from a nearby town) in the state of Jalisco helped peel, mash and mix some 25,000 avocados to make a whopping 3 tonnes (6,600 lbs) of delicious dip, thus setting the new world record for the Largest serving of guacamole.

Photo: Volunteers from a culinary school mix mashed avocados as they attempt to set a new World Record for the largest serving of guacamole in Concepcion de Buenos Aires, Jalisco, Mexico.

The Guinness World Records world record for the largest serving of guacamole weighed 2,669.5 kg (5,885.24 lb) and was achieved by the Municipality of Tancítaro Michoacan (Mexico), in Tancítaro, Mexico, on 4 April 2013.

Avocado growers in Mexico’s Jalisco state mobilised on Sunday to break the world record for the biggest guacamole, a whopping 3 tonnes of delicious dip made from “green gold.”

More than 600 student chefs and 400 people from the rural town of Concepcion de Buenos Aires prepared the traditional dish for thousands people, many of whom came from the Jalisco state capital of Guadalajara.