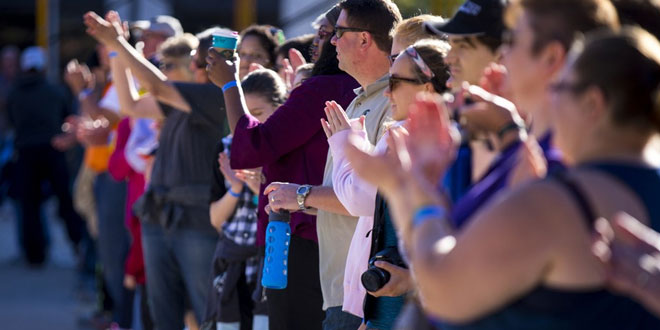 Grand Rapids, Michigan, USA – October 2, 2017 – A total of 327 people assembled in Calder Plaza to set a new world record for the Largest Cakewalk Dance, during an event organized by Consumers Credit Union and Nothing Bundt Cakes in Grand Rapids.

Photo: A new world record was set for the Book of Records at Calder Plaza. According to Ashley Abbott Bodien of Kids’ Food Basket, a total of 327 people assembled in Calder Plaza to set a new record for World’s Largest Cakewalk.

The previous world record was 280 people, set in August 2016 in Grainger County, Tenn.

The cakewalk involves participants walking around a path of squares in time to music, which plays for a duration and then stops. A number is then called out, and the person standing on the square with that number wins a cake.