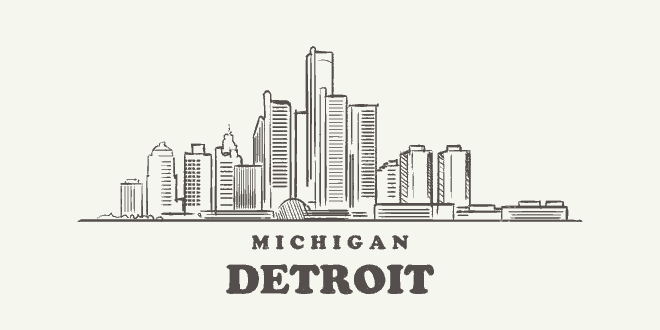 Michigan State – The state of Michigan consists of two peninsulas formed by the Great Lakes–the large mitten-shaped Lower Peninsula and the smaller Upper Peninsula – plus numerous islands located within the Great Lakes. The state has land borders with Ohio, Indiana, and Wisconsin; water forms part of the state boundary with Wisconsin and all of it with Illinois and Minnesota. Canada and Michigan are joined for 1,160 km (720 mi) along the international boundary.

The name Michigan is derived from two Algonquian-Anishnabeg words, michi (“large”) and gami (“lake”). The state’s early economy was dominated by the fur trade centered at the Straits of Mackinac and Detroit. Agriculture, timber, and mining developed during the 19th century, whereas motor vehicle manufacturing, mineral processing, and the leisure-time industries have been most important during the 20th century.

The Michigan Basin bedrock underlying Michigan dates from the Precambrian and Paleozoic eras (3.9 billion to 225 million years ago). The present shape of both the Great Lakes and Michigan’s peninsulas was formed about 2,500 years ago as a result of glacial ice and meltwater action and elevation changes of the lakes’ outlets.

The Lower Peninsula topography consists of lowland areas punctuated with glacial uplands. Lowlands formed from former glacial lake beds are located in the southeast, around SAGINAW and MUSKEGON. Glacial moraines form the thumb upland and the northern upland, which rises to 518 m (1,700 ft) near Cadillac. When the Pleistocene glaciers melted 10,000 to 16,000 years ago, glacial till was deposited throughout the peninsula, forming hilly moraines, plains, and numerous wetlands.

Michigan has more than 11,000 natural inland lakes, which are an important resource for recreation. Houghton Lake is the largest, with an area of 80 sq km (31 sq mi). The total length of Michigan’s rivers is 58,162 km (36,140 mi). Most of the rivers are relatively short, but are useful for hydroelectrical power generation. Numerous attractive waterfalls are found in the Upper Peninsula. The Grand is the longest river and flows 418 km (260 mi) in the southwestern part of the state. The Saginaw River system drains an area of nearly 15,540 sq km (6,000 sq mi). In the late 1980s, Zebra mussels, native to the Black and Caspian seas, became established in the fresh waters of the Great Lakes with unknown environmental impact to the state’s lakes and streams.

Tourism, professional sports, and other leisure time activities are linked to numerous businesses that employ many thousands of people. Out-of-state visitors are attracted by Michigan’s plentiful outdoor recreation opportunities; water resources, including the Great Lakes and the thousands of inland lakes and streams, are particularly appealing for sports and nature enthusiasts. Seasonally, golf and skiing are popular.

Material from the oldest dated archaeological site in Michigan suggests that Paleo-Indian hunters inhabited the area north of Detroit about 11,000 years ago. After 500 BC the Hopewellian MOUND BUILDERS moved into the state and brought with them a rich culture, long-distance trade, and the burial cult for which they are named. Subsequently the state was inhabited by three Algonquian-Anishnabeg tribes: the OJIBWA, a fishing culture centered in the eastern Upper Peninsula; the OTTAWA, “the traders” located in the western Lower Peninsula; and the Potawatomi, found in the southwest. The Wyandot (Huron), an Iroquoian-speaking tribe, were formerly concentrated in the southeast.

The first European to explore the area that is present-day Michigan was Etienne BRULE, who visited the Upper Peninsula about 1620. In 1668, Father Jacques MARQUETTE founded the first permanent settlement Sault Sainte Marie. Throughout this early period fur trading with the Indians dominated the activities of the Euro-Americans; missionary efforts were also prevalent. Forts Michilimackinac (1715) and later Mackinac (1780; both now reconstructed) became renowned as the center of fur trade. In 1701, Antoine de la Mothe CADILLAC established Fort Ponchartrain, which subsequently came to control the fur trade in the Lower Peninsula. In 1760, near the end of the FRENCH AND INDIAN WAR between the British and French, the British gained control of the area and governed it until 1796. During this period the British built Fort Lernoult (1779) at Detroit and Fort Mackinac (1780), neither of which American forces were powerful enough to seize during the Revolution. In hope of controlling part of the Great Lakes region, the Spanish entered the Lower Peninsula briefly in 1781.

In 1787 the area became part of the NORTHWEST TERRITORY; subsequently fighting broke out between Indians in the area (with British support) and the United States. After Gen. Anthony WAYNE’s victory at FALLEN TIMBERS (1794), Indian resistance was broken, and the British peacefully relinquished (1796) Detroit and Fort Mackinac under the terms of JAY’s TREATY. Michigan Territory was established in 1805. During the WAR of 1812, Michigan was temporarily lost to the British.

Michigan’s pioneer land boom came in the 1830s and 1840s. It was spurred by the completion of the ERIE CANAL (1825), road building, and the spread of favorable reports concerning the agricultural quality of the land. In 1835, Michigan residents ratified a constitution for statehood. Admission to the Union, however, was delayed because of a border dispute with Ohio over control of Toledo. The dispute was resolved by awarding Toledo to Ohio and part of the Upper Peninsula to Michigan, which received statehood on Jan. 26, 1837. The mining boom in the Upper Peninsula began in the mid-1840s with the modern-era discovery of copper and iron ore (Indians had previously known of them). The demand for lumber in the Midwest and Plains laid the foundation for Michigan’s nation-leading logging boom during the last half of the 19th century. The state’s virgin forests were depleted because cutting rates were astonishingly high in comparison to present-day harvests. In the 1870s loggers cleared about 13,400 ha (33,000 acres) yearly, and they doubled that rate in the peak years of the 1890s. During the Civil War and later years, Michigan farms became known for the production of wheat, potatoes, hops, and sheep.

During the Civil War, 23% of the state’s male population (more than 90,000 persons) fought, and almost 14,000 died. Because of the wartime labor shortages and the trend to create labor-saving devices, the innovative foundation was laid for the evolution of the automobile industry. As early as 1886, R. E. Olds drove a steam car in Lansing. Henry Ford established his company in 1903. The assembly-line production of about 15 million low cost Model T cars between 1908 and 1927 coupled with Ford’s $5-per-day minimum-wage policy set in 1914 (considered a high wage at the time) revolutionized Michigan’s economy. In 1926 the General Motors Corporation sales reached a billion dollars, a milestone in its progress toward becoming the world’s largest corporation.

The Depression of the 1930s led to statewide economic hardship and also a labor-relations crisis of lasting magnitude. In 1935 the UNITED AUTO WORKERS union (UAW) was formed. Between 1935 and 1941, in a series of violent strikes involving the major automobile plants, the UAW won the right to negotiate company-wide labor contracts. With the outbreak of World War II, automobile production was halted and the plants were rapidly converted for war production. Michigan received more wartime defense contracts than any other state and produced a diversity of motor-related armaments as well as guns, artillery, and ammunition. The Willow Run B-24 Bomber Plant employed 42,000 persons and produced 8,685 aircraft, more than any other plant in the nation. Following World War II automobile production began again and soon reached record levels. Employment in the motor vehicle industry, however, dropped significantly after the Korean War, partly because of automation and decentralization of the industry.

Throughout the 20th century, black and white unskilled workers from the South relocated in Detroit and other industrial cities. Blacks became increasingly concentrated in the central cities while whites moved to suburban areas. Although interracial riots had occurred in 1863 and 1943, the worst instance of civil strife took place in Detroit in 1967 when a riot resulted in dozens of deaths and huge property losses.

Revitalization and Prospects for the Future

Since the urban turmoil and women’s equality movements of the 1960s, several blacks and women leaders have gained political power, university presidencies, and prominence in the arts. Mall projects in city centers have resulted in uneven (modest) downtown revitalization, with most economic development continuing at suburban sites. Urban sprawl and agricultural land loss have continued.

The cities of Grand Rapids and Lansing have built thriving community colleges in downtown renewal locations, coupled with civic-center complexes. Detroit, in persistent attempts to revitalize, has constructed the riverfront Renaissance Center, People Mover, Science Center, and the Joe Louis Arena, with other projects continuing into the 1990s. Muskegon’s innovative wastewater spray irrigation system and numerous other local projects are helping to reduce lake and stream contamination. Neutralizing such hazardous sites, along with recycling efforts, may provide a growth industry into the 21st century.

Somewhat curtailing economic development is Michigan’s near-bottom state rank in per-capita return of tax dollars as federal revenue spending in the state. Michigan has moved to strengthen its share of the global economy and has established trade offices on four continents; it ranks among the top five states in export income. State automobile manufacturers are investing with foreign motor-vehicle firms in joint projects.

Michigan maintains its tradition of support for socially responsible welfare programs. Continuing important challenges include greater economic diversity and the adaptation of the economy to a low-growth or stable population, revitalization of the environment, expansion of the leisure-time segment of the economy, the creation of innovative agricultural products, and rebalancing the support of education within the total economy after the severe cuts of the 1980s.

Si quaeris peninsulam amoenam circumspice (“If you seek a pleasant peninsula, look about you”)