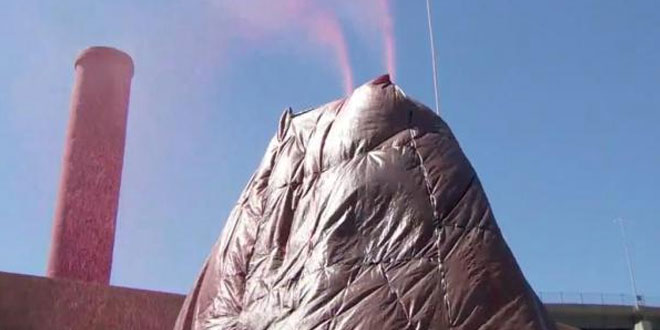 Photo: The Oregon Museum of Science and Industry erected the 34-foot replica volcano which sets the new world record for the Largest baking soda and vinegar volcano.

The Guinness World Records world record for the largest baking soda and vinegar volcano is 8.62 m (28 ft 3.3 in) tall, achieved by pupils, parents and staff of Elmfield Steiner School (UK), when measured and demonstrated at their premises in Stourbridge, UK, on 9 May 2015.

Guinness World Records also recognized the world record for the most active volcano; it is Kilauea, in Hawaii, USA, erupting on a continuous basis since 1983. Lava is being discharged at a rate of 5 m³(7 yd³ or 176 ft³) per second.

“It’s something really exciting that OMSI has always wanted to do in terms of breaking a world record,” Libby Trobitz of the museum said.

“I think it’s going to be a lot of fun, hands on science.”

An estimated crowd of 3,000 people gathered at the museum on Sunday as they poured about sixty-six gallons of vinegar and 50 gallons of a baking soda-water mixture into the massive volcano as reddish liquid poured from the top.

The volcano was constructed to celebrate OMSI’s “POMPEII: THE EXHIBITION” exhibit and museum event planner Sonali Shivdasani said she is “100 percent confident” it will set the world record.

The current Guinness world record holder, a 27-foot volcano was built by Elmfield Rudolf Steiner School in the United Kingdom.