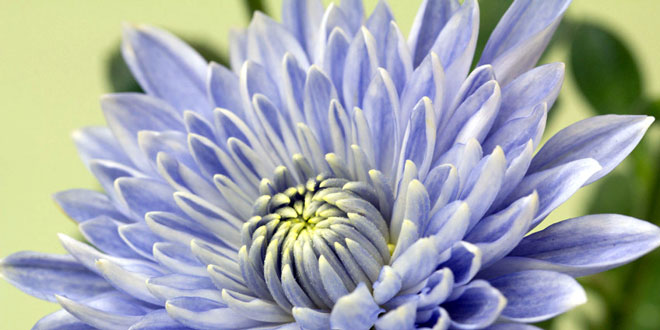 Tokyo, Japan – July 27, 2017 – After 13 years of extensive research, scientists in Japan have created the world’s first blue chrysanthemums; the team had a breakthrough when they combined the DNA of three plants.

Photo: Japanese scientists have created the world’s first blue chrysanthemums. After 13 years of research, the team had a breakthrough when they combined the DNA of three plants.

The Guinness World Records world record for the most chrysanthemum blooms on a single stem is 4,351 and was achieved by Yoshiteru Nomura (Japan) at All Japan Chrysanthemum Exhibition, Izumi-shi, Osaka, Japan, on 4 November 2011. The chrysanthemum plant measured 4.5 m (14ft 9 in) high and 2.2 m (7 ft 2 in) wide.

Guinness World Records also recognized the world record for the longest flower structure; it is 166.15 m (545 ft 1.3 in) and was achieved by the Organizing Committee of the 10th China Chrysanthemum Exhibition (China) at an event held in Kaifeng City, Henan Province, China, on 18 October 2010.

The chrysanthemums are the first to be verified as true blue by The Royal Horticulture Society. Many other flowers that appear to be blue are actually various shades of violet or purple.

“Chrysanthemums are the second best-selling cut flowers after roses in the world,” said lead author Naonobu Noda.
“Our blue chrysanthemums have a novel and natural blue color, which has been confirmed as true blue.”

The experiment is published in the journal Scientific Advances by the National Agriculture and Food Research Organization in Japan.