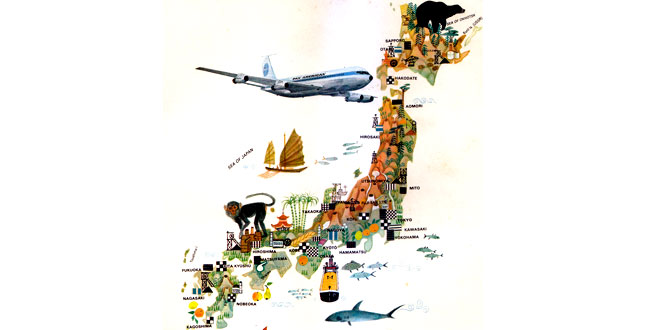 The islands of Japan are mostly mountainous. They contain more than 50 active volcanoes and earthquakes are common. The largest lowland is the Kwanto Plain around the capital Tokyo. The mostly short rivers have ample volumes and hydroelectric projects have been constructed on the upper courses of many of them. Forests cover about 65 per cent of the country. Japan has coniferous forests, which merge to the south into evergreen broad leaf forests. The flora and fauna are rich and Japan is the home of the badger, bear, fox, Japanese macaque, otter, raccoon dog, wolf and other animals.

Today Japan is one of the world’s most industrialized countries, with the high per capita gross national product of US $10,080 in 1981. Japanese industry is characterized by efficient organization, a high degree of mechanization and automation, and a highly skilled and dedicated work-force. The country is the world’s leading manufacturer of automobiles, motor cycles and television sets and it is also a major shipbuilder. Japanese chemicals, electronics, optics and textiles are world famous. There are also large timber, pulp and paper industries, together with food-processing, ceramic and building material industries. However, Japan has few natural resources apart from some coal, copper, limestone, mercury, oil and natural gas and a few other minerals.

In many respects, Japanese transport is a symbol of the country’s advanced technology. There is a dense system of excellent roads and motorways, and a highly efficient system of railways, including some lines operating high speed express trains. Japan has countless tunnels, bridges and causeways to negotiate the many natural obstacles. Japan’s merchant fleet is the world’s second largest. The largest seaport is Yokohama, while the busiest airport at Tokyo handles hundreds of flights a day.