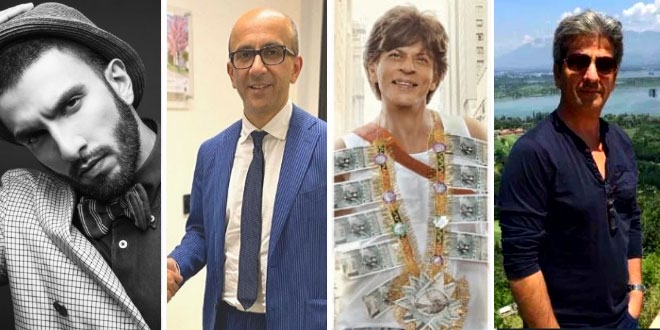 Several social media users have now called the government to call for further investigation to unearth the links between the Bollywood superstars and Pakistan.

Pakistanis sitting in comfort of a foreign land encouraging and pushing Kashmiri youth to pick up guns and even sometimes funding such nefarious activities is not new. However, some of the Bollywood celebrities seem to have developed a habit of fraternizing with individuals who are known to harbor unmitigated hatred for India. From fawning themselves with the D-company chief Dawood Ibrahim – to socializing with Pakistan’s terror establishment, the Bollywood celebrities have often shown that patriotism is a hollow concept for them, worthy only of making money from it by emulating it in their movies.

The warm relationship between ISI agents and the so-called Bollywood celebrities is not a secret anymore as images of actors and cinema icons with Pakistani businessmen close to Pakistan establishment were all over on the internet on Wednesday, raising serious questions regarding the Bollywood directs links with Pakistan.

On Wednesday, netizens unearthed images of Shahrukh Khan and his wife Gauri Khan with California based Kashmiri separatist Tony Ashai, who has been urging Kashmiri youth to fight against India.

It is alleged that Shah Rukh Khan has a very close relationship with Tony Ashai. Ashai is believed to have built a lot of his properties in Dubai, Abu Dhabi and also designed his apartments in Los Angeles. His son Bilal Ashai has been urging the Kashmiri youth to pick up guns.

A Srinagar-based activist Al Iskandar @TheSkandar on Twitter posted a series of tweets alleging that Tony Ashai, also known as Aziz Ashai, has been a member of the terror group Jammu & Kashmir Liberation Front (JKLF) sponsored by ISI. The Bollywood superstar, according to him, had hired Ashai as an architect. Khan’s wife Gauri, he claimed is involved with Ashai in a lot of her projects. 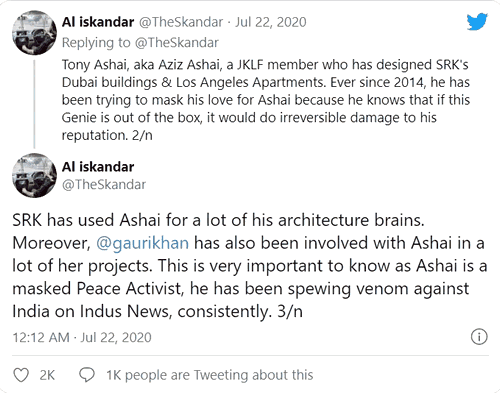 The Kashmiri-based activist said that “it’s a well-documented plan” for Tony Ashai to use his Bollywood influence. He said, Bollywood actor Shah Rukh Khan is a patriotic person himself but is not aware of Tony Ashai’s plans.

Reportedly, Tony Ashai, also known as Aziz Azai, studied at University in Buffalo, US, which was funded by pro-Pakistan terror outfit JKLF. Moreover the first business venture of Ashai – ‘Ashai Design’ was also funded by JKLF, he tweeted.

It is alleged that $450k came from a shell company in Birmingham in autumn of 1992. Tony’s son Bilal Ashai is a member of MSA which has links to The Muslim Brotherhood, the social media user alleged.

Citing Ashai’s pictures with Pakistan Prime Minister Imran Khan, Al Iskandar alleged that Ashai was on the payroll of ISI, who is in touch with many people in Jammu and Kashmir and other parts of the country.

The social media user also posted Ashai’s incendiary anti-India tweets, to take a dig at Ashai saying he himself was sitting in the cosy rooms of California and provoking Kashmiri youth to pick up stones and guns while his own son Bilal Ashai recently graduated from Los Angeles, the University of Southern California with Masters degree.

Tony Ashai’s brother Arthur Ashai is no less of an India hater. In a video that has gone viral on social media, Arthur can be seen bullying an Indian for supporting PM Modi.

His hatred towards Modi & Hindus is bitter

He is quiet on Hindu genocide whom were drove out from Kashmir pic.twitter.com/KPlORAhKkK

He was upset that the Indian man said “Modi Zindabad” on his face and accused him of ‘discriminating’ against people of Kashmir. He bullied him to apologise and asked him whether he will say ‘Modi zindabad’ again.
Not just Bollywood’s intimate relationship with Tony Ashai, social media users dug out several pictures of other stars like Anil Kapoor, Sonam Kapoor, Karan Johar and others with another anti-India activist based in the UK. The netizens pointed out how another Pakistani businessman Aneel Mussarat, also enjoys good relationships with various Indian celebrities.

Aneel Mussarat is believed to be an important aide to Pakistani PM Imran Khan and enjoys close relations with the Pakistani military establishment. Whether it is Shah Rukh Khan or Karan Johar, Sonam Kapoor or her father Anil Kapoor, Deepika Padukone or her husband Ranveer Singh, all these Bollywood luminaries have been found revelling in the company of Mussarat.

A Twitter thread from January went viral on Wednesday

THE Bollywood ~ PAKISTAN connection??!
Thread
Who is this Individual who is seen with Numerous Bollywood Stars??

Who is Aneel Mussarat?

Aneel Mussarat, a British born Pakistani origin businessman and a real estate baron, not only shares a close relationship with a legion of Bollywood personalities but he also has an intimate association with the Pakistan PM Imran Khan, his political party PTI, Chief of Army Staff of Pakistan Army–General Bajwa, General Director of the Inter-Services Public Relations–Asif Ghafoor.

Mussarat has also been vocal in his support for the Rohingya refugees, considered as a “threat to national security” by the government of India. A large number of unaccountable number of Rohingyas have intruded in India through the porous borders it shares with Bangladesh. Mussarat heads the Rafay Mussarat foundation which has partnered with Minhaj Welfare Foundation to provide aid to Rohingya refugees during the Rohingya crisis.

However, what is curious is the close connection that Mussarat has with the current Pakistani Prime Minister Imran Khan, who has made it his ritual to diss about the Indian PM Modi.

Pakistani media refers to him as a close aide of PM Imran Khan. In November 2019, during the inauguration of Kartarpur Sahib Gurudwara, he tried to get close to former Indian Prime Minister Dr Manmohan Singh, but was pushed away by security when he tried to take a selfie.

In 2017, Khan, who was not the Prime Minister of Pakistan then, along with various Bollywood celebs attended Mussarat’s daughter’s wedding in London.

Rehan Siddique, who is a Pakistani but is based on Houston also owns a radio channel where he regularly espouses terrorist activity in Kashmir and India and spreads propaganda. Rehan Siddiqui had extensive experience in the music and radio industry and said to have organised more than 400 successful concerts with many of the biggest stars from South Asia and Bollywood.

Rehan Siddiqui has been organising Bollywood events and funding anti-India propaganda, especially against Kashmir. In February, it was reported that Rehan Siddique was on the radar of Indian authorities after it was revealed that Siddique organises Bollywood events and the money raised from it is used to fund anti-India activities abroad, especially with a focus on Kashmir.

Reportedly, he owns a radio channel and brings Indian artistes to Houston for Bollywood concerts. He uses his radio channels as a platform to run anti-India propaganda.

The diaspora have also asserted that Siddiqui and other Pakistani nationals are working to organise anti-CAA protests in Houston and pro-Khalistan protests by the local Sikh community. Siddiqui’s radio channel is also accused of running anti-India propaganda in the wake of Pulwama attack and the subsequent Balakot strikes.

Calls for investigations into Bollywood links with Pakistan grows

Following the shocking disclosure, Vice President of the BJP, Baijayant Panda urged “patriotic Bollywoodies” to renounce their association with people who encourage violence in Jammu and Kashmir.

Several social media users have now called the government to call for further investigation to unearth the links between the Bollywood superstars and Pakistan.