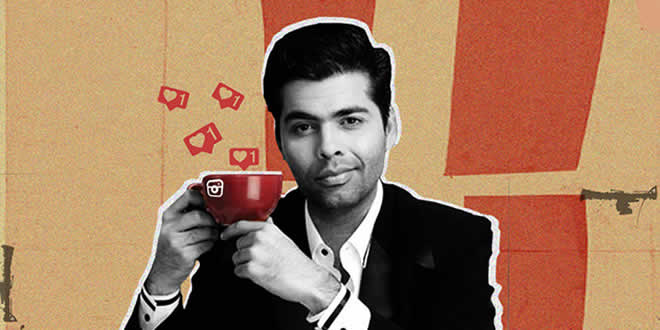 Karan Johar is a son of the late Yash Johar and a popular Indian film director, producer, and TV celebrity. Karan studied at the Greenlawns High School and attended H. R. College in Mumbai, India. Karan has also received a Masters degree in French. Dharma Productions, founded by his father, is his production company.

Karan Johar was first seen as an actor: he played Shahrukh Khan’s close friend, Rocky, in the movie Dilwale Dulhaniya Le Jayenge (1995). He was also assistant director on this film and helped Aditya Chopra in writing the screenplay. In addition, he selected Shahrukh Khan’s costumes, something he continued to do for Shahrukh Khan’s other movies like Dil To Pagal Hai (1997), Duplicate (1998), Mohabbatein (2000), Main Hoon Na and Veer-Zaara (2004).

He made his directorial debut in 1998 with Kuch Kuch Hota Hai, which roughly translates to Something Something Happens. The film was a major box office hit. Kuch Kuch Hota Hai won eight Filmfare Awards in 1998 including Best Movie, Best Director and all four Best Actor awards for both leading and supporting roles. The film, commonly abbreviated KKHH, starred Shahrukh Khan, Kajol, Rani Mukerji, Salman Khan and Anupam Kher.

His second directorial effort, the multi-starrer family drama Kabhi Khushi Kabhie Gham, which translates to Sometimes Happiness Sometimes Sadness, was released in 2001. It was also highly successful. K3G, as the film is commonly abbreviated, went on to win five Filmfare Awards.

In 2003, he produced and wrote the script for Kal Ho Naa Ho, which was directed by Nikhil Advani, his assistant director from Kuch Kuch Hota Hai. Kal Ho Naa Ho, which roughly translates to Tomorrow May Never Come. The film starred Jaya Bachchan, Shahrukh Khan, Saif Ali Khan and Preity Zinta. It too was a hit.

In early 2005, he produced another movie, Kaal, directed by Soham Shah, Johar’s assistant director from Kabhi Khushi Kabhie Gham. Johar did not write the script to Kaal.

In September 2005, after taking a four-year break from directing, he began working on his third film as a director and fourth film as writer, Kabhi Alvida Naa Kehna, which translates to Never Say Goodbye. It stars Amitabh Bachchan, Shahrukh Khan, Rani Mukherjee, Preity Zinta, Abhishek Bachchan, Kiron Kher and Arjun Rampal. KANK, as the film is commonly abbreviated, released on August 11, 2006. It was a big hit in USA and UK but got mixed response in India.

Johar is also the host of a television chat show called Koffee with Karan commissioned by Star World, in which he interviews renowned celebrities from Bollywood and India’s glamor world. Johar describes his show as being “casual, cooler and hipper” and aiming to appeal to Indian yuppiedom. With the first season of the show ending in 2006, Karan will begin the next episode, in February 2007. The second season of the show will feature a live audience. The season is also said to include interviews with prominent industrialists like Vijay Mallya and sports-persons, besides Bollywood favorites Kajol and Rani Mukherjee, Hrithik Roshan, Abhishek Bachchan, Shah Rukh Khan & Amitabh Bachchan.

Johar has hosted many film award ceremonies in India. On September, 30th, 2006 Johar became the first Indian filmmaker to be a jury member in the Miss World competition, in Warsaw, Poland.

Karan Johar has been emerging as one of India’s young thought leaders and was chosen as one of 250 Global Young Leaders by the Geneva-based World Economic Forum 2006. He also spoke at the Wharton India Economic Forum held at the prestigious Wharton School of the University of Pennsylvania in Philadelphia and the Hindustan Times Leadership Summit in New Delhi in November 2006.

Karan Johar’s movies, generally classified as emotional melodramas, find a wide appeal among audiences in India and abroad. His movies tend to glorify the traditions and values of Indian people, and focus on the urban sections of India in particular. Inspired by Yash Chopra’s style of film making, almost all of Johar’s films rank high in the “feel good” and “glamorous realism” factor. Karan Johar movies consistently celebrate material luxuries and are characterized by elaborate sets, exquisite costumes and picturesque songs.

In a massive development in the NCB Bollywood drug nexus probe, Karan Johar’s Dharma Production is under the scanner of the anti-drug agency as the NCB has summoned Executive Producer & director Kshitij Ravi Prasad who is employed by the production house. He has been asked to join the probe by 11 am on Friday. According to sources, Kshitiz is in Delhi now and his house was also searched.

In the latest development, Akali Dal leader Manjinder Singh Sirsa took to his Twitter handle to make a massive claim that producer Karan Johar will be summoned by the Narcotics Control Bureau over the 2019’s alleged drug party video. Sirsa’s tweet read, “Sources have been quoted saying that NCB will soon summon Karan Johar. He will be questioned about the 2019 drug party video.” [sic]

Karan Johar’s Dharma Production is under the scanner of the anti-drug agency as the NCB has summoned Executive Producer & director Kshitij Ravi Prasad who is employed by the production house. He has been asked to join the probe by 11 am on Friday. According to sources, Kshitiz is in Delhi now and his house was also searched.