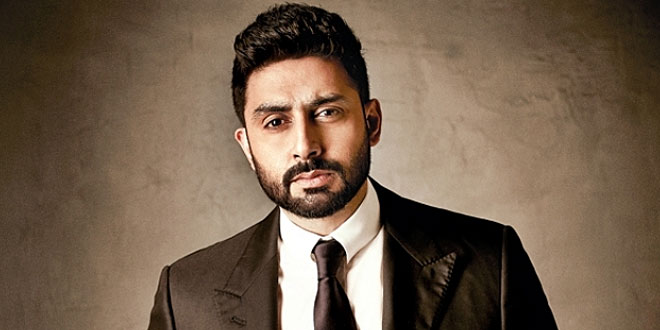 Bachchan made his acting debut in the drama film Refugee (2000). After earning little praise for his roles in a series of commercially unsuccessful films, he starred in the action thriller Dhoom (2004), a box office hit and the first film in the popular Dhoom series. Bachchan received critical acclaim for supporting role in Yuva (2004), and starred in commercially successful films like Bunty Aur Babli (2005), Sarkar (2005), Kabhi Alvida Naa Kehna (2006) and Guru (2007). He also starred in Dhoom 2 (2006), Dostana (2008), Paa (2009), Bol Bachchan (2012), Dhoom 3 (2013) and Happy New Year (2014). He produced Paa along with Sunil Manchanda which won the National Film Award for Best Feature Film in Hindi.

Married to actress and former Miss World Aishwarya Rai, Bachchan comes from an illustrious Bollywood family. His father Amitabh Bachchan is a leading actor in Hindi cinema and his mother Jaya Bhaduri Bachchan is a former leading actress.

Abhishek Bachchan was born on 5th February, 1976. His grandfather, Harivansh Rai Bachchan, was a poet of Hindi literature and professor at the Allahabad University in Uttar Pradesh. The original surname of his family is Srivastava, Bachchan being the pen name used by his grandfather. However, when Amitabh entered films, he did so under his father’s pen name. Bachchan is of Kayastha heritage on his father’s side, Bengali from his mother’s side and Punjabi from his grandmother’s side. Time magazine listed Amitabh Bachchan and Aishwarya Rai on its list of most influential Indians.

Bachchan was dyslexic as a child; this was referred to by Aamir Khan in the film Taare Zameen Par. He attended Jamnabai Narsee School and Bombay Scottish School in Mumbai, Modern School, Vasant Vihar, New Delhi, and Aiglon College in Switzerland. He then attended Boston University, but dropped out.

Abhishek made his film debut in J. P. Dutta’s Refugee along with Kareena Kapoor in 2000 but the film was not considered a success. In a span of four years, Bachchan went on to do many more movies, without any major box-office successes. However, with his performance in Mani Ratnam’s Yuva, he proved his mettle as an actor. He portrayed the character of Lallan which earned him the Filmfare Best Supporting Actor Award and every other supporting actor award at the major film award functions.

In 2004 he starred in Dhoom which was the first box office hit of his career. In 2005 he shot to fame with three consecutive hits: Bunty Aur Babli, Sarkar and Dus. His fourth film in 2005 Bluffmaster was moderately successful. He recently won his second Filmfare Award in the Best Supporting Actor category for Sarkar.

His first release in 2007 was Guru. He has received much acclaim for his performance.

The song “Kajra Re”, which Abhishek performed in the film Bunty Aur Babli (2005), was voted best song of 2005 and best choreographed song of 2005 in a poll by the Hindustan Times.

He was engaged to actress Karisma Kapoor in 2001, an engagement later broken. Gossip has linked him with a number of actresses. After much speculation it was announced on January 14, 2007 that he became engaged to Aishwarya Rai in a private ceremony. This was later confirmed by Amitabh Bachchan. On the occasion of his 31st birthday, his father gifted him a Bentley Continental GT. It was later found, however, that Amar Singh was the real owner of the Bentley. Mr. Amar Singh has maintained that he is the owner of the Bentley and has never gifted the car to Abhishek.