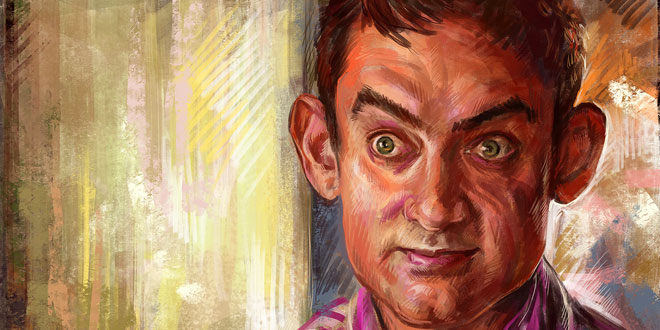 Aamir Khan — Aamir Khan born on March 14, 1965 is an Indian actor, film director and film producer. Khan was part of several commercially successful movies and has established himself as one of the leading actors of Hindi cinema, delivering a number of highly acclaimed performances.

Appearing as a child actor in his uncle Nasir Hussain’s film Yaadon Ki Baaraat (1973), Khan began his professional career eleven years later, with the film, Holi (1984). He received his first commercial success with his cousin Mansoor Khan’s film Qayamat Se Qayamat Tak (1988) and won a Filmfare Best Male Debut Award for his performance in the film. After eight previous nominations during the 1980s and 1990s, Khan received his first Filmfare Best Actor Award for his performance in Raja Hindustani (1996), his biggest commercial success so far.

He later earned his second Best Actor award at the Filmfare ceremony for his performance in the 2001 Academy Award nominated Lagaan. After a four year break from acting, Khan made his comeback with Ketan Mehta’s The Rising (2005). In 2007, he made his directorial debut with Taare Zameen Par, for which he received a Filmfare Best Director Award. Khan is the founder-owner of Aamir Khan Productions.

Khan began his film career as a child actor in a home production, produced and directed by Nasir Hussain, titled Yaadon Ki Baraat (1973) and Madhosh (1974). Eleven years later, he made his adult acting debut in a role that went quite unnoticed in Ketan Mehta’s Holi (1984).

Khan’s first notable leading role came in 1988 in the film Qayamat Se Qayamat Tak which was directed by his cousin and Nasir Hussain’s son Mansoor Khan. This film was a breakthrough commercial success, effectively launching Khan’s career as a leading actor. Having the typical ‘chocolate hero’; looks, he was publicised as a teen idol. After that, he went on to appear in several other films in the late ‘80s and early ‘90s: Dil (1990), which became the highest grossing film of the year, Dil Hai Ke Manta Nahin (1991), Jo Jeeta Wohi Sikandar (1992), Hum Hain Rahi Pyar Ke (1993) (for which he also wrote the screenplay), and Rangeela (1995). Most of these films were successful critically and commercially. Other successes include Andaz Apna Apna, co-starring Salman Khan. At the time of its release the movie was reviewed unfavorably by critics, but over the years has gained a cult status.

Khan then took a four year break citing personal problems, and returned in 2005 with Ketan Mehta’s Mangal Pandey: The Rising playing the title role of a real-life sepoy and a martyr who helped spark the Indian Rebellion of 1857 or the ‘First War of Indian Independence’;.

During the years of Qayamat Se Qayamat Tak, Khan married Reena Dutta. His parents did not approve of their marriage because of her not being a Muslim. As a result, Khan’s marriage stayed a secret both from his parents and the media for a while. Dutta made a brief appearance in the popular song sequence Papa Kehte Hain in Qayamat Se Qayamat Tak. The story of Khan’s marriage garnered major public attention when it was first revealed. Even so, Reena Dutta maintained a low profile and continued her job at a travel agency. They had two children, a son named Junaid and a daughter, Ira, and led a quiet family life away from the public eye. Reena was involved, briefly, in Khan’s career when she worked as a producer for Lagaan. In December 2002, Aamir filed for divorce, ending the 15-year marriage, with Reena taking the custody of both their children.

On December 28, 2005, Aamir married Kiran Rao who had been an assistant director to Ashutosh Gowariker during the filming of Lagaan.

Recently, his brother Faisal caused a media scandal by accusing Khan of mistreating him and forcing him to take medication. Faisal has been said to be mentally unstable. On October 31, 2007, the Bombay high court granted temporary custody of Faisal to their father, Tahir Hussain. Khan’s family came out in a public statement, supporting him on all counts in this matter. The statement was also signed by his former wife, Reena Dutta.

In July 2021, the couple announced their separation and told they would raise their son Azad as co-parents.