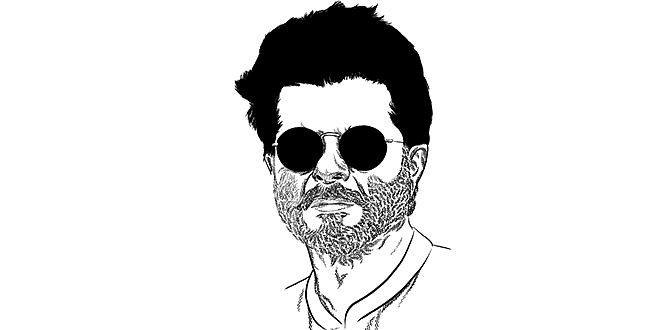 Anil Kapoor is a popular Indian actor who appears in Bollywood movies. He was born on 24 December 1959 in Mumbai.

Anil has many film industry connections. His father, Surinder Kapoor, is a film producer. His brother, Boney Kapoor, is a producer, younger brother Sanjay Kapoor is also a well known Bollywood actor though not as successful. He is the brother-in-law of the actress Sridevi with whom he had starred in many films.

His sister Reena is married to Sandeep Marwah of the famous Marwah Films & Video Studios in Noida Film City.

Anil made his Bollywood debut in Hamare Tumhare in 1979 where he had a supporting role. After a few minor roles in films such as Hum Paanch (1980) and Shakti (1982) he got his first leading role in the 1983 film Woh Saat Din. He then appeared in a Telugu film Vamsa Vriksham and played a lead role in director Mani Ratnam’s Kannada film Pallavi Anupallavi. This was followed by successful Hindi films like Meri Jung (1985) and Karma (1986). In 1987, he starred in Mr. India which was one of his biggest box office hits.

In 1988 he starred in Tezaab and was rewarded with a Filmfare Best Actor Award. The following year he had two more hit films, Ram Lakhan and Parinda. In 1991 he won critical praise for his performance in the film Lamhe which was a box office failure but was a success Overseas. In 1992, Anil starred in Beta, for which he won a second Filmfare Best Actor Award award. After a period of little box office success for the next few years, in 1997 he had three box office successes, Judaai, Virasat and Deewana Mastana. In 1999 once again he had three consecutive box office hits, Biwi No.1, Hum Aapke Dil Mein Rehte Hain and Taal.

He won a National Award for Best Actor for his role in the 2000 film Pukar. After another long period of box office flops he had his long-awaited hit with No Entry in 2005 which was one of the highest grossing films of the year.

Anil married Sunita Kapoor in 1984; the couple has two daughters and a son. Daughter Sonam Kapoor made her debut alongside Ranbir Kapoor, the son of actor Rishi Kapoor, in Sanjay Leela Bhansali’s film Saawariya.

Kapoor’s first role in an international film was in Danny Boyle’s 2008 Academy Award-winning film Slumdog Millionaire, for which he shared the Screen Actors Guild Award for Outstanding Performance by a Cast in a Motion Picture. His performance in the eighth season of the action series 24 generated rave reviews from the American press. Globally, Anil Kapoor is one of the most recognized Indian actors.