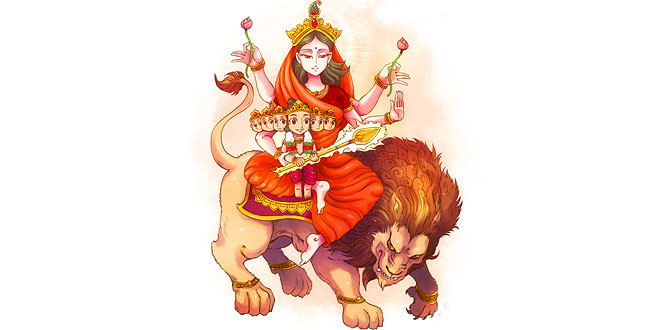 Who is Skanda Mata? 5th Form of Durga

The fifth aspect of the Mother Durga is known as ‘Skanda Mata’ – the mother of Skanda or Lord Kartikeya, who was chosen by gods as their commander in chief in the war against the demons.

Who is Skanda Mata?

She is worshiped on the fifth day of Navratri. She is accompanied by the Lord Skanda in his infant form. She has four arms and three eyes, holds the infant Skanda in her right upper arm and a lotus in her right hand which is slightly raised upwards. The left arm is in pose to grant boons with grace and in left lower hand which is raised also holds a lotus. She has a bright complexion and often depicted as seated on a lotus.

Skanda Mata is the fifth form of Hindu Goddess Durga. Her name comes from Skanda, an alternate name for the war god Kartikeya, and Mata, meaning mother. As one of the Navadurga, the worship of Skanda Mata takes place on the fifth day of Navaratri. Her abode is in Vishuddha chakra.

She is four-armed, three-eyed, and rides on a lion. One of her hands is in the fear-dispelling Abhayamudra position while the other is used to hold the infant form of her son Skanda on her lap. Her remaining two hands are typically shown holding lotus flowers. She is light complexioned, and as she is often pictured seated on a lotus, she is sometimes referred to as Padamasani.

It is believed that she awards devotees with salvation, power, prosperity and treasures. She can grant oceans of wisdom even to most illiterate person, if he happens to worship her. Skanda Mata who possesses the brilliance of the sun fulfills all the desires of her devotees. He who is selflessly devoted to her, attains all the achievements and treasures of life. The worship of Skanda Mata purifies the heart of a devotee. While worshiping her, the devotee should have absolute control over his senses and mind. He should free himself from worldly bondage and worship her with a single-pointed devotion. Her worship is twice blessed. When the devotee worships her, Lord Skand, her son in her lap, is automatically worshiped. Thus, the devotee happens to enjoy the grace of Skandmata along with the grace of Lord Skand. If a devotee worships her devoid of selfishness, the Mother blesses them with power and prosperity. The devotees who worship Skanda Mata shine with divine splendor. Her worship is ultimately conducive to salvation. She is regularly known as “The Goddess of Fire”.

Previous Durga Puja in Kolkata: Celebrations & Pandals
Next Who is Katyayani? 6th form of Mother Durga