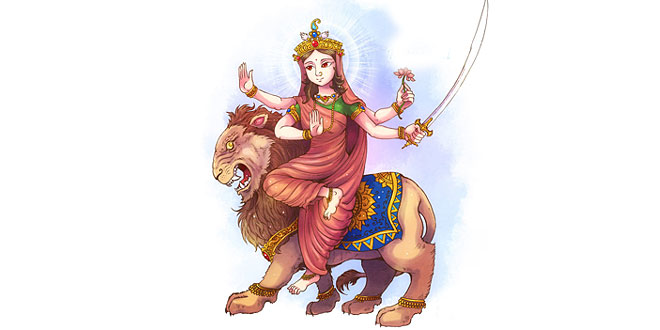 The sixth form of Mother Durga is known as ‘Katyayani’, who is worshiped on the six day of Navratri.

The legend behind her name goes thus: Once upon a time, there was a great sage called Kata, who had a son named Katya. Kata was very famous and renowned in the lineage of saints. He underwent long austerities and penance in order to receive the grace of the Mother Goddess. He wished to have a daughter in the form of a goddess. According to his wish and desire the Mother Goddess granted his request. Katyayani was born to Kata as an avatar of Durga.

Katyayani is one of the avtars of The Hindu Mother Goddess, Durga. She is seen as the slayer of the tyrannical demon Mahishasura. She is also the sixth form amongst Navadurga or the nine forms of Hindu goddess Durga (Parvati), worshiped during the Navratri celebrations. She may be depicted with four, ten, or eighteen hands. This is the second name given for Goddess Adi Parashakti in Amarakosha, the Sanskrit lexicon (Goddess Parvati names – Uma Katyayani Gauri Kali Haimavati Ishwari). Goddess Katyayani was worshiped by Sita, Radha and Rukmini for a good husband.

She is first mentioned in the Taittiriya Aranyaka part of the Yajurveda. Skanda Purana mentions her being created out of the spontaneous anger of Gods, which eventually led to slaying the demon, Mahishasura, mounted on the lion. This occasion is celebrated during the annual Durga Puja festival in most parts of India.

Her exploits are described in the Devi-Bhagavata Purana and Devi Mahatmyam, part of the Markandeya Purana attributed to sage Markandeya Rishi, who wrote it in Sanskrit ca. 400-500 CE. Over a period of time, her presence was also felt in Buddhist and Jain texts and several Tantric text, especially the Kalika-Purana (10th century), which mentions Uddiyana or Odradesa (Odisha), as the seat of Goddess Katyayani and Lord Jagannath.

In Hindu traditions like Yoga and Tantra, she is ascribed to the sixth Ajna Chakra or the Third eye chakra and her blessings are invoked by concentrating on this point.

Previous Who is Skanda Mata? 5th Form of Durga
Next Yamuna may be less polluted this Durga Puja