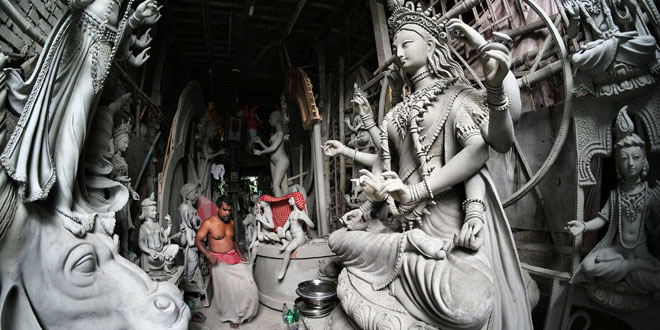 Durga Puja in Kolkata: One of the biggest social events of India, Durga Puja is considered the main festival for Bengalis. It is a ten-day carnival in West Bengal, the eastern state of India. Magnificently created puja pandals are erected at every other street of Kolkata, the capital city of West Bengal. Every pooja pandal is unique in its own terms, with beautiful patterns that are true delight to the eyes. A spurt of fanfare can be sensed all through the ten days, especially on the last four days of the festival. Bengalis in the metro city rejoice to their heart’s content. They consider the festival as a wonderful occasion to reconnect to their family and friends. The air is filled with festivity, during the season. In the following lines, we have provided information on the celebrations of Durga Puja in Kolkata.

The preparations of the festival commence one or two months in advance. Puja bonus (extra money apart from the salary) is given to the employees of both government and private organizations, in Kolkata, since the bread-winner of the family brings in clothes and furbishes for the home, during the festive season. Pre-pooja bargain sales are displayed by shops, as they cash in a lot during the festival. Every household prepares itself to welcome the season, with great enthusiasm.

Celebrations of the festival start with Mahalaya, the first phase of the waxing moon in Aswin. During the time, about thousands of people offer prayers to their ancestors at the city’s river banks. This ritual is referred to as ‘Tarpan’. The festive mood builds up in the people, when Dhakis (drummers) belonging to the countryside start gathering near the city. The local Puja organizers are attracted by the feathered drums played by the drummers.

While the festival was celebrated within the families some times back, it has taken the shape of a community festival, celebrated at Puja pandals. The construction of the deity of Goddess Durga and other gods start a couple of months prior to the festival. A place in the north Kolkata – Kumartuli is famous for the production of beautiful idols made of clay. This is the region, where expert artisans show their dexterity of making idols of Goddess Durga, the demon Mahisasura, Lord Kartik, Lord Ganesha, Goddess Saraswati and Goddess Lakshmi, required for the festival.

Puja pandal is the main attraction of Durga Puja. Many people are expert at making magnificent Puja pandal, (the covered huge stage for the Puja), by using paper, wood, bamboos, clothes and other materials. They come up with a number of innovative ideas every year and cash in a lot of money by erecting the Puja pandals that comprise of mesmerizing art work. Some pandals are also built as the replica of world-famous structures.

Durga Puja in Kolkata: Celebrations On Main Days Of Puja

The main days of Durga Puja are seventh, eight, ninth and the tenth day. The festival picks up pace on the sixth day – Maha Shashti. The long and details rituals of the Puja start on the seventh day. An expert priest is called upon to chant mantras, shlokas and perform aarti and offerings at the Puja pandal. Apart from the rituals, cultural activities such as song and dance competitions and games are also organized during the last four days of the festival. Professional singers are called upon to sing bhajans and stuti, to praise Goddess Durga. Outside the pandal, the city is illuminated with display of sparkling and colorful lights. Educational institutions and offices are closed during the four main days of Durga Puja. To put it in simple words, it can be said that Durga Pooja is the greatest festival of Kolkata.