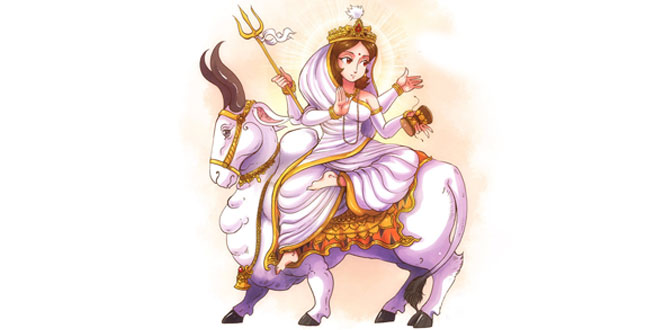 Maha Gauri is worshiped on the eighth day of Navratri. Her power is unfailing and instantly fruitful. As a result of her worship, all sins of past, present and future get washed away and devotees get purified in all aspects of life.

Who is Maha Gauri?

Maha Gauri is intelligent, peaceful and calm. Due to her long austerities in the deep forests of the Himalayas, she developed a dark complexion. When Lord Shiva cleaned her with the water of the Ganges, her body regained its beauty and she came to be known as Maha Gauri, which mean extremely white. She wears white clothes, has four arms, and rides on a bull. Her right hand is in the pose of allaying fear and her right lower hand holds a trident. The left upper hand holds a ‘damaru’ (a small rattle drum) and the lower one is in the pose of granting boons to her devotees.

Maha Gaurii is the eighth avatar of Goddess Durga and amongst the Navadurgas. Mahagauri is worshiped on the eighth day of Navaratri. According to Hinduism, Goddess Maha Gauri has the power to fulfill all the desires of her devotees. The one who worships the goddess, gets relief from all the sufferings in life. Mahagauri has four arms. Her right arm is in the pose of allaying fear and right lower hand holds a trident in it. She holds a tambourine in her left upper arm and the lower one is in the form of a blessing.

The name Mahagauri means extremely white, as she was white in color and very beautiful. Mahagauri is usually depicted with four hands, the hands holding a trident, lotus, and drum, while the fourth is in a blessing gesture. The lotus is sometimes replaced with a rosary. She rides a white bull, usually shown wearing white clothes.

The story of Mahagauri’s origins is as follows: The demons Shumbha and Nishumbha could only be killed by a female child of Parvati. Hence, as advised by Brahma, Shiva used his magic to turn Parvati’s skin black, giving Parvati the epithet “Kali”, meaning “black”. However, the word “Kali” can also mean “death”, so Parvati was teased. Parvati was agitated by this teasing, so she performed severe penance to Brahma so as to get her fair complexion back. She succeeded in her penance and was advised by Brahma to take a bath in the Mansarovar River in Himalaya. As she took a bath, her dark skin separated from her and took the form of a female. She was called Kaushiki, being born from the skin of Parvati. As a result of the separation of her black skin, Parvati got her white fair complexion back, and so she gained the epithet “Mahagauri”. Still, for the task of demons’ assassination, she gave her fair complexion to Kaushiki and she (Parvati) again attained the form of Kali. Kali transformed into Chandi (Chandraghanta). Chandi killed demon Dhumralochan. Chanda and Munda were killed by Goddess Chamunda who appeared out from the third eye of Chandi. Chandi then transformed into Kaalratri again to kill Raktabija and Kaushiki had killed Shumbh and Nishumbh, after which she got merged with Kali to transform her back into Gauri. Hence, Goddess Kaushiki too got merged with Parvati, hence giving her the titles of Mahasaraswati or Ambika in Skanda Purana and Devi Mahatmya (part of the Markandeya Purana) respectively.