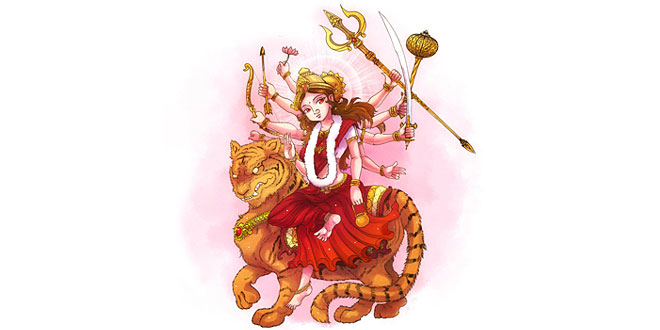 The third facet of Goddess Durga is ‘Chandraghanta‘, who is worshiped on the third day of Navratri, for peace, tranquility and prosperity in life.

She has a ‘chandra’ or half moon in her forehead in the shape of a ‘ghanta’ or bell. That is why she is called ‘Chandraghanta‘. She is charming, has a golden bright complexion and rides a lion. She has ten hands, three eyes and holds weapons in her hands. She is the apostle of bravery and possesses great strength to fight in the battle against demons.

In Hinduism, Chandraghanta is the third form of Goddess Durga (Parvati). Her name Chandra-Ghanta, means “one who has a half-moon shaped like a bell. Her third eye is always opened and she is always ready for war against demons”. She is also known as Chandrakhanda, Chandika or Rannchandi. Her worship takes place on the third day of Navaratri (the nine divine nights of Navadurga). She is believed to reward people with her grace, bravery and courage. By her grace all the sins, distresses, physical sufferings, mental tribulations and ghostly hurdles of the devotees are eradicated. It also represent her married form.

According to Shiva Maha Purana, Chandraghanta is the “Shakti”, of Lord Shiva in the form of Chandrashekhara. Each aspect of Shiva is accompanied by Shakti, therefore they are Ardhanarishvara.

Chandraghanta has ten hands where two hands hold a Trishula (trident), Gada (mace), bow-arrow, khadak (sword), Kamala (lotus flower), Ghanta (bell) and kamandal (waterpot), while one of her hands remains in blessing posture or abhayamudra (Fear dispelling). She rides on a tiger or lion as her vehicle, which represents bravery and courage, she wears a half moon depicting a Bell on her forehead and has a third eye in the middle of her forehead. Her complexion is golden. Shiva sees Chandraghanta’s form as a great example of beauty, charm and grace.

Idol of Chandraghanta on tableaux during the Mangalore Dasara procession.

Chandraghanta rides a tiger or lion as her vehicle, representing bravery. This is a terrible aspect and is roaring in anger. This form of Durga is not completely different from earlier forms. It shows that when provoked she can be malevolent. Her malevolent form is said to be Chandi or Chamunda Devi. She is otherwise the very embodiment of serenity.

The devotees who adore and worship Chandraghanta develop an aura of divine splendor. Their persons emit invisible power-waves which exercise a great impact on those who come in contact with them. They easily achieve success in life. Chandraghanta is ready to destroy the wicked, but to her devotees she is a kind and compassionate Mother showering peace and prosperity. During the battle between her and the demons, the horrible sound produced by her bell sent thousands of wicked demons to the abode of the Death God. She is ever in a warring posture which shows her eagerness to destroy the foes of her devotees so that they may live in peace and prosperity. Divine vision is acquired by her grace. If a devotee happens to enjoy divine fragrance and hears diverse sounds, he is said to be blessed by the Mother. Her abode is in Manipura chakra.

Previous Who is Kushmanda? 4th form of Goddess Durga
Next Who is Siddhidatri? 9th Form of Durga