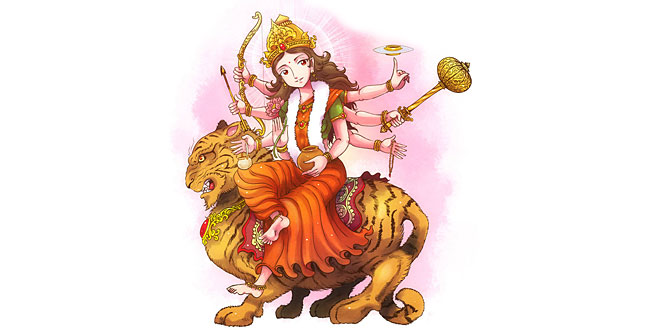 Who is Kushmanda? 4th form of Goddess Durga

Kushmanda is the fourth form of the mother goddess and is worshiped on the fourth day of Navratri.

The meaning of the name ‘Ku-shm-anda’ is as follows: ‘Ku’ = a little; ‘ushma’ = ‘warmth’; ‘anda’ = ‘the cosmic egg’. So she is considered the creator of the universe. The universe was no more than a void full of darkness, until her light spreads in all directions like rays from the sun. Often she is depicted as having eight or ten hands. She holds weapons, glitter, rosary, etc., in her hands, and she rides a lion.

Kushmanda is a Hindu goddess, credited with creating the world with her divine smile. Followers of the Kalikula tradition believe her to be the fourth form of the Hindu goddess Durga. Her name signals her main role: Ku means “a little”, Ushma means “warmth” or “energy” and Anda means “cosmic egg”.

Kushmanda is worshiped on the fourth day of the festival of Navratri (nine nights of Navadurga) and She is believed to improve health and bestow wealth and strength. Goddess Kushmanda has eight hands and because of that She is also known as Ashtabhuja Devi. It is believed that all the power to bestow Siddhis and Niddhis are located in her Jap Mala.

It is stated that She created the whole universe, which is called Brahmanda (ब्रह्माण्ड) in Sanskrit, by just flashing little bit of her smile. She also likes Bali of white pumpkin known as Kushmanda (कुष्माण्ड). Due to her association with Brahmanda and Kushmanda She is popularly known as Goddess Kushmanda. Her abode is in Anahata chakra.

Kushmanda is depicted with eight to ten hands holding a trident, discus, sword, hook, mace, bow, arrow and two jars of honey (Elixir) and blood. Her one hand is always on abhayamudra from which she blesses all her devotees. She rides on a tiger.

Previous Alwar Festival in Rajasthan
Next Who is Chandraghanta? 3rd Form of Durga