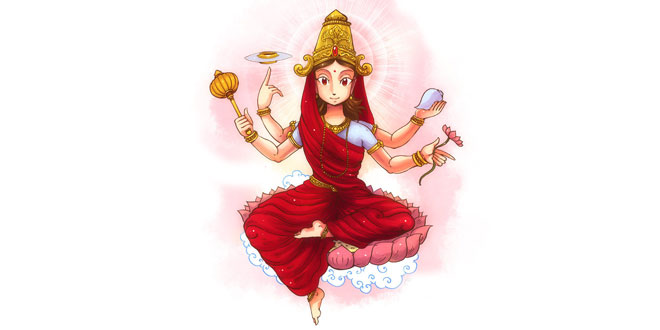 Siddhidatri is the ninth form of Goddess. She is worshiped on the ninth day of Navratri. Siddhidatri has supernatural healing powers.

She has four arms and she is always in a blissful happy enchanting pose. She rides on the lion as her vehicle. She blesses all Gods, saints, yogis, tantrics and all devotees as a manifestation of the Mother Goddess. In ‘Devi Bhagvata Purana‘ it is mentioned that Lord Shiva worshiped her and was blessed with all Siddhis (supernatural powers). By her blessings his half body became female and other half body male in the avatar of Ardhnarishvara.

Siddhidhatri is the ninth form of the Goddess Durga or Parvati, the meaning of her name is as follows: Siddhi means supernatural power or meditative ability, and Dhatri means giver or awarder. She is worshiped on the ninth day of Navaratri (nine nights of Navadurga); she fulfills all the divine aspirations and completes the mundane.

It is believed that one side of Lord Shiva’s body is that of Goddess Siddhidatri. Therefore, he is also known by the name of Ardhanarishwar. According to Vedic scriptures, Lord Shiva attained all the siddhis by worshiping this Goddess.

Around the time when the universe was just a massive void completely full of darkness, there were no indications of the world anywhere. But then a ray of divine light, which is ever existing, spread everywhere, illuminating each and every nook of the void. This sea of light was formless. Suddenly, it started taking a definite size, and finally looked like a Divine Lady, who was none other than Goddess Mahashakti herself. The Supreme Goddess came forth and gave birth to the Trinity of Gods, Brahma, Vishnu and Mahadev. She advised the three Lords to contemplate to understand their roles of performing their duties for the world. Acting on the words of Goddess Mahashakti, Tridev sat by the bank of an ocean and performed penances for many years. The pleased Goddess appeared before them in the form of Siddhidhatri. She bestowed upon them, she created Her 2 clone and visnu, Bramha’s wives in the forms of Saraswati, Lakshmi and goddess adi parasakti born as sati and reborn as Parvati. Goddess Siddhidhatri entrusted Brahma to take up the role as the creator of worlds, Vishnu with the role of preserving the creation and its creatures, and Mahadev with the role of destroying the worlds when it is time. She tells them that their powers are in the forms of their respective wives, who will help them perform their tasks. The Goddess assured them that she will also provide to them, divine miraculous powers, which will also help them carry out their duties. Saying this, she bestowed to them eight supernatural powers, in which they were named Anima, Mahima, Garima, Laghima, Prapti, Prakambya, Ishitva and Vashitva. Anima means reducing one’s body to the size of a crumb, Mahima means expanding one’s body to an infinitely large size, Garima means becoming infinitely heavy, Laghima means becoming weightless, Prapti means having omnipresence, Prakambya means achieving whatever one desires, Ishitva means possessing absolute lordship, and Vashitva means having the power to subjugate all. Apart from the eight supreme siddhis that goddess Siddhidatri had granted Tridev, she is believed to have granted to them, nine treasures and ten other kinds of supernatural powers or potentialities. The two parts, man and woman, created Gods, demons, monsters, heavenly beings, ogres, trees, damsels, snakes, cows, buffalos, predators, prey, aquatic animals, Aruna and Garuda and many more species of the world were born and thus originated from them. The creation of the entire world was now fully complete, full of innumerable stars, galaxies as well as constellations. The solar system was complete with the nine planets. On Earth, firm landmass was created, surrounded by such vast oceans, lakes, streams, rivers and other bodies of water. All types of flora and fauna had originated and were given their proper habitations. The 14 worlds were created and constructed altogether, giving the above-mentioned creatures places of residences to stay in, as to which they all called home.

In this form Durga is seated on a lotus and is four-armed. She holds a lotus, mace, Chakra and shankha. In this form Durga removes ignorance and she provides the knowledge to realize that or Brahman. She is surrounded by Siddhas, Gandharvas, Yakshas, Devas (Gods) and Asura (Demons) worship her. The Siddhi that she provides is the realization that only she exists. She is the mistress of all achievements and perfections.