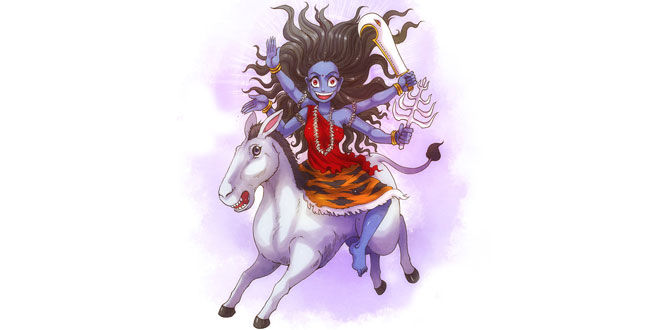 Who is Kaal Ratri? 7th Form of Durga

Kaal Ratri is the seventh form of Mother Durga and is worshiped on the seventh day of Navratri. She has a dark complexion, disheveled hair and a fearlessness posture. A necklace flashing lightning adorns her neck.

Who is Kaal Ratri?

She has three eyes that shine bright and terrible flames emanate from her breath. Her vehicle is the donkey. Her raised right hand always seems to grant boons to all worshipers and all her right lower hand is in the pose of allaying fears. Her left upper hand holds a thorn-like weapon, made of iron and there is a dagger in the lower left hand. She is black like Goddess Kali and holds a sparkling sword in her right hand battle all evil. Her gesture of protection assures us of freedom from fear and troubles. So she is also known as ‘Shubhamkari’ – one who does good.

Kaal Ratri (sometimes spelled Kaalratri) is the seventh of the nine forms of the Goddess Durga, known as the Navadurga. She is first referenced in the Durga Saptashati, Chapters 81-93 of the Markandeya Purana, the earliest known literature on the Goddess Durga. Kalaratri is widely regarded as one of the many destructive forms of the Mother Goddess, which include Kali, Mahakali, Bhadrakali, Bhairavi, Mrityu, Rudrani, Chamunda, Chandi and Durga.

It is not uncommon to find the names, Kali and Kalaratri being used interchangeably, although these two deities are argued to be separate entities by some. Kali is first mentioned in Hinduism as a distinct goddess around 3000 BC. Chronologically then, Kaalratri (described textually in the Mahabharata, dated 3137 BC – 3067 BC) predates but most likely, informs, present representations of Kali.

Kaalratri is traditionally worshiped during the nine nights of Navratri celebrations. The seventh day of Navratri pooja (Hindu prayer ritual) in particular is dedicated to her and she is considered the fiercest form of the Mother Goddess, her appearance itself invoking fear. This form of Goddess is believed to be the destroyer of all demon entities, ghosts, evil spirits and negative energies, who flee upon knowing of her arrival.

The Saudhikagama, an ancient Tantric text referenced in the Silpa Prakasha, describes Goddess Kalaratri as being the goddess that rules the night portion of every day and night. She is also associated with the crown chakra (also known as the sahasrara chakra), thereby giving the invoker, siddhis and niddhis (particularly, knowledge, power and wealth).

Kaalratri is also known as Shubankari (शुभंकरी) – meaning auspicious / doing good in Sanskrit, due to the belief that she always provides auspicious results to her devotees. Hence, it is believed that she makes her devotees fearless.

Other less well-known names of Goddess Kaal Ratri include Raudri and Dhumorna.

Previous Who is Maha Gauri? 8th Form of Durga
Next Durga Puja Images For Students And Children