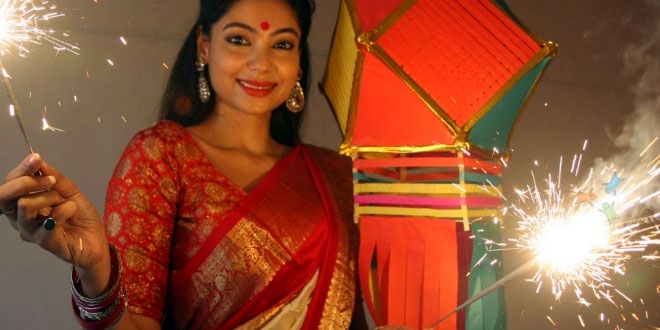 How to celebrate Diwali in Maharashtra? Maharashtra, with its major chunk of Marathi population celebrates Diwali in a special way that is quite different from Diwali celebrations in North India. The four day long Diwali Festival, in this state usually begins with Vasu-baras, in honor of the female cow, representing motherhood. The rituals of this day involves married women performing puja to lactating cows with calves, offering gratitude for providing milk and in turn contributing to the overall well being of their children. An important tradition followed on this day is also buying gold and silver jewelries. It is believed that doing thus, ushers in wealth and good fortune throughout the year.

Another festival held on the same day is the Dhanatrayodashi, which is the Marathi name for Dhanteras. Unlike in other parts of India, on this day the Maharashtrian women light diyas in the name of each male members of the family for their long life. Known as Yama-Deep-Dan in the state, the festival involves lighting specially kneaded flour diyas in honor of Lord Yama, the god of death in Hindu mythology. There is an interesting legend related to this festival, a young prince was predestined to die on the fourth day of his marriage. But on that day, his wife kept him awake and lighted diyas at the entrance. As it was destined, god of death ‘Yama’ disguised as a snake tried to enter the Prince’s chamber but could not complete his mission out of compassion for the young wife who lighted the diyas to pray to him. This day is hence celebrated as Yamandeepdaan and a diya is kept burning whole night in the name of Yama.

The second day is marked by Narak-Chaturdashi, another name for Chhoti Diwali in Maharashtra. This day is marked by taking special bath early in the morning after a full body massage of scented oil. The special locally abhyang-snan involves using a particular Ayurveda preparation made of sandalwood, camphor, manjistha, rose, orange peels and turmeric instead of synthetic soap. Firecrackers and fireworks add to the overall festive mood of the whole ritualistic bath. Steamed vermicelli with milk and sugar or puffed rice with curd is prepared as a part of the celebration on this day.

This celebration is related to the legend of Lord Krishna killing the wicked demon Nakarasura. It is said that after killing the demon, Krishna returned home early morning. The womenfolk massaged scented oil to his body and gave him a good bath to wash away the filth from his body. Since then the custom of taking bath before sunrise on this day has become a traditional practice especially in Maharashtra. In the evening of this day, Maharashtrians perform the Lakshmi-Pujan worshiping Lakshmi, the goddess of wealth. Guests are served an array of savory snacks like chivda, chakali, shankar-pale, anarse, kadaboli, karanji, shev, chirote etc. especially during this day. Diwali sweets and Diwali gifts are exchanged between near and dear ones during the Diwali festival.

Throughout Diwali, Marathi people hang traditional Akash-kandil or Akash-dive and light up panti’s, or traditional diyas outside their houses. Rangolis are also very popular in Maharashtra during the Diwali season.

On the third day of Diwali is the Diwalicha Padva – a celebration of conjugal life between married couples. On this day, wives perform aukshan, a traditional aarti for the overall well being and long life of their respective husbands. And the husbands in return give special Diwali gifts to their wives.

The last day of Diwali festival is called Bhau Bij the Marathi name for Bhaidooj, held to celebrate brother sister bond. On this day, sisters do ‘aukshan‘ of their brothers and pray for their long life. Brothers, in their turn bless their sister and pamper them with loads of Bhau-Bij / Bhai dooj gifts.

The Maharashtrians conclude the Diwali celebrations with Tulsi Vivah, which generally comes on the 11th day of Diwali.