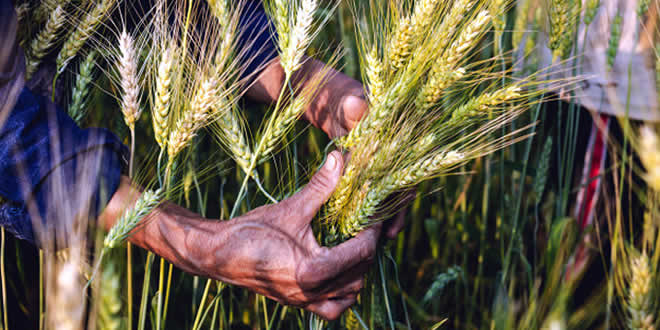 Barley — Barley (Hordeum vulgare) is an annual cereal grain, which serves as a major animal feed crop, with smaller amounts used for malting and in health food. It is a member of the grass family Poaceae. In 2005, barley ranked fourth in quantity produced and in area of cultivation of cereal crops in the world (560,000 km²). (H. vulgare) is descended from wild barley (Hordeum spontaneum). Both forms are diploid (2n=14 chromosomes). As wild barley is interfertile with domesticated barley, the two forms are often treated as one species, Hordeum vulgare, divided into subspecies spontaneum (wild) and subspecies vulgare (domesticated). The main difference between the two forms is the brittle rachis of the former, which enables seed dispersal in the wild.

Half of the United States‘ barley production is used as an animal feed. A large part of the remainder used for malting and is a key ingredient in beer and whiskey production. Two-row barley is traditionally used in German and English beers, and six-row barley in American beers. Non-alcoholic drinks such as barley water and mugicha (popular in Korea and Japan) are also made from unhulled barley. Barley is also used in soups and stews, particularly in Eastern Europe. A small amount is used in health foods and coffee substitutes.

Barley (Hordeum vulgare), a member of the grass family, is a major cereal grain grown in temperate climates globally. It was one of the first cultivated grains, particularly in Eurasia as early as 10,000 years ago. Barley has been used as animal fodder, as a source of fermentable material for beer and certain distilled beverages, and as a component of various health foods. It is used in soups and stews, and in barley bread of various cultures. Barley grains are commonly made into malt in a traditional and ancient method of preparation.

In 2017, barley was ranked fourth among grains in quantity produced (149 million tonnes) behind maize, rice and wheat.