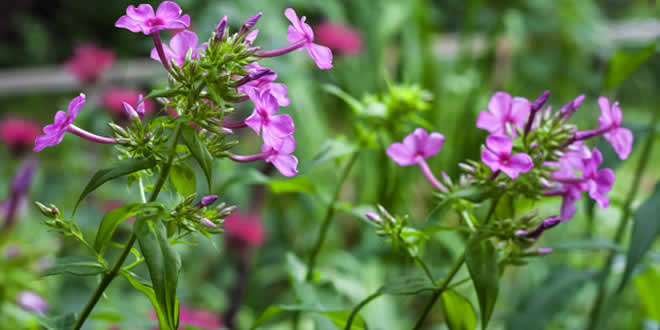 Phlox Plant Encyclopedia — Phlox (pronounced “flocks” and meaning ‘flame’ in Latin) is a genus of 67 species of annual or perennial flowering plants. Some species flower in early spring while others flower in summer into fall. Most species are native to temperate North America but a few species are also from northeastern Asia. They are found growing in diverse habitats from alpine locations to open woodlands and prairies.

Phlox plant is best grown in well-drained soil, exposed to partial shade to partial sun. The foliage of Phlox is sometimes eaten by the larvae of some Lepidoptera species including Dot Moth, Gazoryctra wielgusi, Hummingbird Hawk-moth and Schinia indiana which feeds exclusively on P. pilosa. Phlox species are also a popular food source for groundhogs, rabbits and deer. The flowers, when fertilized, typically produce one relatively large seed.

Several species of phlox are commonly cultivated in gardens. Most cultivated phlox, with the notable exception of Drummond phlox, are perennial. Phlox cultivars are available in shades of white, purple, blue, pink, and yellow. Phlox are valued in the garden for their ability to attract butterflies.