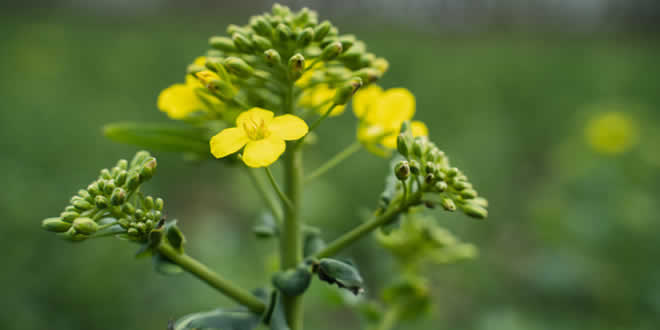 Mustard Plant — Mustards are several plant species in the genera Brassica and Sinapis whose small mustard seeds are used as a spice and, by grinding and mixing them with water, vinegar or other liquids, are turned into a condiment also known as mustard. The seeds are also pressed to make mustard oil, and the edible leaves can be eaten as mustard greens.

Mild white mustard (Sinapis hirta) grows wild in North Africa, the Middle East and Mediterranean Europe and has spread farther by long cultivation; brown or Indian mustard (B. juncea), originally from the foothills of the Himalaya, is grown commercially in the UK, Canada and the US; black mustard (B. nigra) in Argentina, Chile, the US and some European countries. Canada grows 90% of all the mustard seed for the international market. The Canadian province of Saskatchewan produces almost half of the world’s supply of mustard seed.

Although the varieties of mustard are well-established crops in Hellenistic and Roman times, which leads to the assumption that it was brought into cultivation at an earlier time, Zohary and Hopf note that “there are almost no archeological records available for any of these crops.” Wild forms of mustard and its relatives the radish and turnip can be found over west Asia and Europe, suggesting that their domestication took place somewhere in that area. However Zohary and Hopf conclude, “Suggestions as to the origins of these plants are necessarily based on linguistic considerations.”