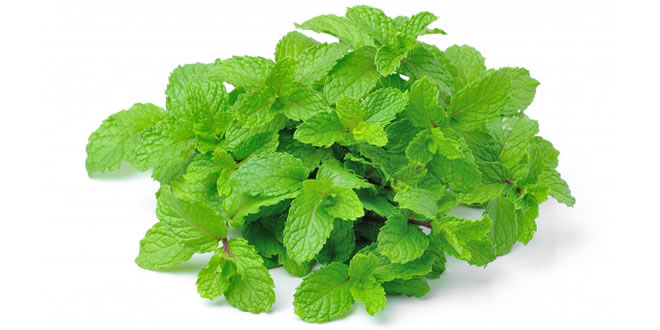 Mint: Aromatic Flowering plant — Mentha (mint) is a genus of about 25 species (and many hundreds of varieties) of flowering plants in the family Lamiaceae (Mint Family). Species within Mentha have a subcosmopolitan distribution across Europe, Africa, Asia, Australia, and North America. Several mint hybrids commonly occur.

Mints are aromatic, almost exclusively perennial, rarely annual, herbs. They have wide-spreading underground rhizomes and erect, branched stems. The leaves are arranged in opposite pairs, from simple oblong to lanceolate, often downy, and with a serrated margin. Leaf colors range from dark green and gray-green to purple, blue and sometimes pale yellow. The flowers are produced in clusters (‘verticils’) on an erect spike, white to purple, the corolla two-lipped with four subequal lobes, the upper lobe usually the largest. The fruit is a small dry capsule containing one to four seeds.

While the species that make up the Mentha genus are widely distributed and can be found in many environments, many grow best in wet environments and moist soils. Mints will grow 10–120 cm tall and can spread over an indeterminate sized area. Due to the tendency to spread unchecked, mints are considered invasive.

All mints prefer, and thrive, in cool, moist spots in partial shade. In general, mints tolerate a wide range of conditions, and can also be grown in full sun.

They are fast growing, extending their reach along surfaces through a network of runners. Due to their speedy growth, one plant of each desired mint, along with a little care, will provide more than enough mint for home use. Some mint species are more invasive than others. Even with the less invasive mints, care should be taken when mixing any mint with any other plants, lest the mint take over. To control mints in an open environment, mints should be planted in deep, bottomless containers sunk in the ground, or planted above ground in tubs and barrels.

Some mints can be propagated by seed. Growth from seed can be an unreliable method for raising mint for two reasons: mint seeds are highly variable, one might not end up with what one presupposed was planted; some mint varieties are sterile. It is more effective to take and plant cuttings from the runners of healthy mints.

The leaf, fresh or dried, is the culinary source of mint. Fresh mint is usually preferred over dried mint when storage of the mint is not a problem. The leaves have a pleasant warm, fresh, aromatic, sweet flavor with a cool aftertaste. Mint leaves are used in teas, beverages, jellies, syrups, candies, and ice creams. In Middle Eastern cuisine mint is used on lamb dishes. In British cuisine, mint sauce is popular with lamb.