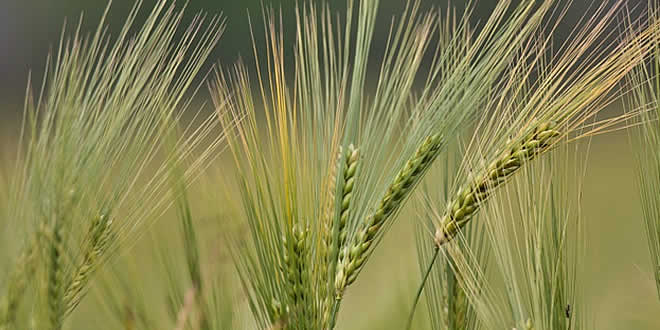 Rye Crop Plant Encyclopedia — Rye (Secale cereale) is a grass grown extensively as a grain and forage crop. It is a member of the wheat tribe (Triticeae) and is closely related to barley and wheat. Rye grain is used for flour, rye bread, rye beer, some whiskies, some vodkas, and animal fodder. It can also be eaten whole, either as boiled rye berries, or by being rolled, similar to rolled oats.

Rye is a cereal and should not be confused with ryegrass which is used for lawns, pasture, and hay for livestock.

Rye, alone or overseeded, is planted as a livestock forage or harvested for hay. It is highly tolerant of soil acidity and is more tolerant of dry and cool conditions than wheat, though not as tolerant of cold as barley. In Turkey, rye is often grown as an admixture in wheat crops. It is appreciated for the flavor it brings to bread, as well as its ability to compensate for wheat’s reduced yields in hard years.

The flame moth, rustic shoulder-knot and turnip moth are among the species of Lepidoptera whose larvae feed on rye.

Rye bread, including pumpernickel, is a widely eaten food in Northern and Eastern Europe. Rye is also used to make the familiar crisp bread. Rye flour has a lower gluten content than wheat flour, and contains a higher proportion of soluble fiber.

Some other uses of rye include rye whiskey and use as an alternative medicine in a liquid form, known as rye extract. Often marketed as Oralmat, rye extract is a liquid obtained from rye and similar to that extracted from wheat grass. Its benefits are said to include a strengthened immune system, increased energy levels and relief from allergies, but there is no clinical evidence for its efficacy.