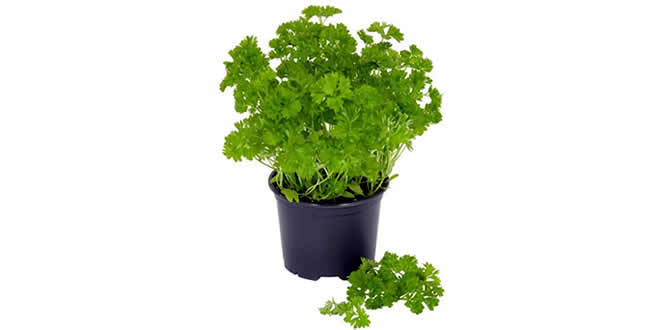 Parsley Plant — Parsley (Petroselinum crispum) is a bright green, biennial herb, also used as spice. It is very common in Middle Eastern, European, and American cooking. Parsley is used for its leaf in much the same way as coriander (which is also known as Chinese parsley or cilantro), although it has a milder flavor. Two forms of parsley are used as herbs: curly leaf and Italian, or flat leaf (P. neapolitanum). Curly leaf parsley is often used as a garnish. Many people think flat leaf parsley has a stronger flavor, and this opinion is backed by chemical analysis which finds much higher levels of essential oil in the flat-leaved cultivars. One of the compounds of the essential oil is apiol.

Another type of parsley plant is grown as a root vegetable. This type of parsley produces much thicker roots than types cultivated for their leaves. Although little known in Britain and the United States, root parsley is very common in Central and Eastern European cuisine, where it is used in most soups or stews. Though it looks similar to parsnip it tastes quite different.

The use of curly leaf parsley is often favored, because it cannot be confused with poison hemlock, like flat leaf parsley or chervil.

Parsley’s germination is notoriously difficult. Tales have been told concerning its lengthy germination, with some suggesting that “germination was slow because the seeds had to travel to hell and back two, three, seven, or nine times (depending on sources) before they could grow.” Germination is inconsistent and may require 3 – 6 weeks.