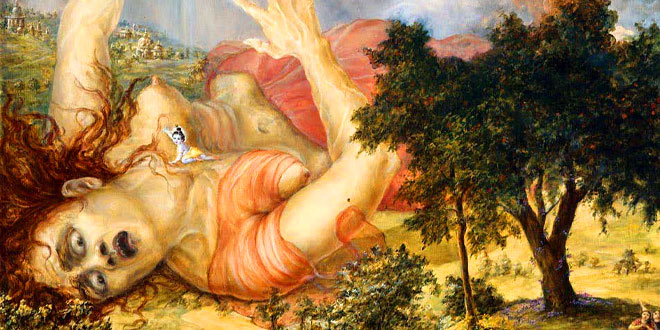 Krishna’s Childhood in Vrindavana: When Yasoda and Nanda found Krishna as their son, they performed all the religious ceremonies in secret, to avoid Kansa’s wrath. The family astrologer, Gargamuni, told the family, “Your son Krishna is the Supreme Personality of Godhead. He will protect you from Kansa’s persecutions, and by His grace only, you will surpass all difficulties. Therefore raise Him carefully, because many demons will try to attack him.”

This warning proved true because throughout His childhood, Krishna fought Kansa’s demons, along with all the other demons and jealous and misguided demigods who approached Him.

Kansa enlisted a demon named Putana to kill newborn babies. The demon dressed as a beautiful woman and flew on her broom to Krishna’s nursery, hoping to kill Him with the poison she had smeared on her nipples. Krishna’s mother innocently let Putana pick the baby up and put it to her breast. Krishna closed His eyes and sucked out her life air, killing her, without taking her poison. When Putana’s soul departed, her body returned to its real form: a gigantic witch that smashed trees as it fell, stretching twelve miles across the landscape. Putana’s soul attained liberation due to the benevolent act of offering her breast milk to Krishna and the inhabitants of Vrindavana cremated the body.

After Krishna killed Putana, the elder gopis (women of the village) picked Him up and performed auspicious rites for His protection and purification. They bathed Him and chanted religious mantras to prevent further attacks. Krishna’s parents treated children lovingly, celebrating their birthdays and other rites of passage. They acted in a kindly way to correct their children when they got into mischief, for example sometimes Krishna and Balarama would get into the cow shed, catch the tail of a calf and stand up. The calves would drag them around and they would be covered with mud. Rather than become angry, the mothers would call their friends to watch the fun. Mother Yasoda never hit Krishna, but once tied Him to a grinding mortar when He stole butter and fed it to the monkeys. The scriptures explain that as she tried to tie him, the rope was too short. She kept using a longer rope, but it always came up too short.

Krishna tried to crawl and the mortar stuck between two Arjuna trees in the courtyard. The trees fell and two splendorous demigods emerged and offered prayers to Krishna. Narada Muni cursed had the souls to stand as trees for one hundred years and Krishna freed them.

When the boys got a little older, they spent their days playing with the calves in a nearby field. Their mothers cooked the noon meal and called them from the fields, or they would pack lunches for them. Children were considered the wealth of the family and were protected from abuse. However, rather than the parents protecting Krishna, it is the child who protects the village and all the people in it.