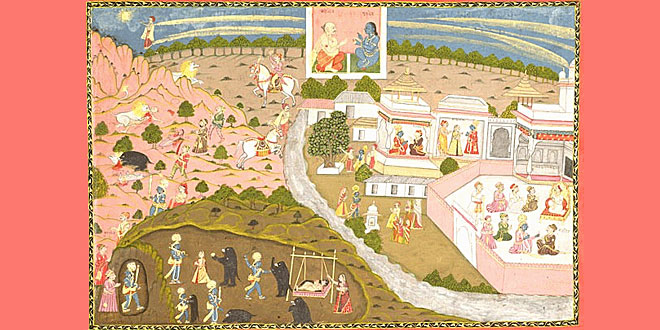 Satrajit, a nobleman of Dwarka, was a devotee of Surya, the Sun God. Surya being pleased with Satrajit’s devotion appeared before him and gifted him the Syamantaka gem. The Syamantaka gem’s specialty was that it could magically produce eight measures of gold a day.

Satrajit became a really wealthy man. Krishna then approached Satrajit and told him that he should share the gem with the other people of Dwarka and give it to King Ugrasena. Satrajit declined saying that the jewel belonged to him.

A few days later, Satrajit’s brother Prasena wore the jewel as a necklace and went out on a hunt. He climbed a tree waiting for some game, a lion came by and just as Prasena was about to shoot it, a snake, which dropped from the branch above, surprised him. Now Prasena was startled and he fell from the tree. As he was falling, the necklace with the Syamantaka gem got caught in a branch and Prasena hung by the neck, and was killed instantly.

Prasena did not return to Dwarka and people were wondering what had happened to him. Satrajit suspected that Krishna might have killed Prasena in order to attain the gem. Krishna, in order to prove his innocence, gathered a search party and went into the forest.

A few hours later, they found Prasena’s body. Krishna noticed lion tracks around the body and assumed that a lion must have killed Prasena. On following the lion tracks, they came across the body of the dead lion. Krishna noticed that the lion had the marks of a bear’s claws and noticed that there were bear tracks around the body. On following the bear tracks Krishna reached Jambavan’s cave. Krishna sensing the danger ordered the rest of the party to stay outside while he entered the cave alone. Krishna found Jambavan’s son playing with the Syamantaka gem. Frightened by the stranger, Jambavan’s son let out a wail that alerted Jambavan. Now Jambavan thought someone was attacking his child and attacked Krishna. Krishna fought Jambavan for twenty-eight days after which Jambavan recognised Krishna’s divinity and surrendered to him. Along with the gem, Jambavan offered Krishna his daughter Jambavati’s hand in marriage. This Krishna accepted.

Krishna then returned to Dwarka with the Syamantaka gem and his new bride. Krishna returned the gem to its rightful owner Satrajit who by then was ashamed of accusing Krishna. In order to make up for his accusations and show his good will towards Krishna, Satrajit offered his daughter Satyabhama to Krishna.

But Satyabhama already had three suitors – Akrura, Kritavarma and Shatadhanwa. They were angered by the fact that Satrajit have given Satyabhama to Krishna and not to one of them. Shatadhanwa in his rage killed Satrajit while he slept and stole the Syamantaka gem from him. On realizing what he had done, Shatadhanwa left the gem with Akrura and fled from Dwarka. Krishna and Balrama gave chase and killed Shatadhanwa for his crime. Not finding the gem on Shatadhanwa, Krishna knew that he must have left it with Akrura for safekeeping.

Ganapathi was the son of Lord Shiva. He was a short, fat boy with an …