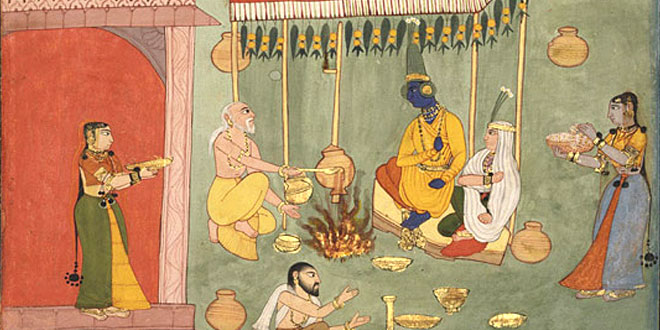 Satya was the most beautiful and most gifted girl in the world. She was a princess – the daughter of the rich and powerful King of Khosla. Her fame spread far and wide. Many royal princes asked the King of Khosla for her hand in marriage.

Satya reached the age of marriage and the King had to find a suitable match for her. Every one of the princes who wished to marry Satya was great in his own way. The King therefore found it difficult to choose one. He thought over the matter for many days and decided to hold a contest.

The King announced that any prince who could yoke the seven wild bulls he kept in his stables would win the hand of Satya in marriage.

A day was fixed for the marriage. Invitations were sent to all the suitable kings and princes to come and try their luck and their skill in the contest. The King also made all arrangements to celebrate the marriage in grand style.

New palaces were built for the royal guests. Large kitchens and huge dining halls were put up, and big feasts arranged. Famous musicians and dancers were invited to entertain the guests. The city was decorated and lit up.

The guests started arriving. Every king and every prince hoped that he would win the contest and marry Satya. Every one of them came in a large procession. In every procession there were elephants, chariots, horses, palanquins, and soldiers. The kings and princes also brought their ministers and court officials, and many servants carrying boxes of jewels and clothes.

All the guests were received with great honour. They were housed in beautiful palaces. They were feasted and entertained most splendidly.

On the marriage day, the royal guests set out in their best clothes and jewels. They assembled on one side of a large field, which was fenced on all sides. The King of Khosla arrived with his family, his ministers, court officials, and friends. He told the big gathering that his daughter, Satya, would marry the first prince who could yoke the seven wild bulls together. He then ordered the contest to begin.

The ceremony began with the beating of drums and the sounding of bugles. The pipers and trumpeters joined in. The music was exciting.

Seven large cages were then brought in. The attendants opened the doors of the cages. Seven huge, fierce-looking bulls rushed out. They moved about, challenging everyone.

Every prince desired to win Satya and wanted to get in first to try his luck. Many of them rushed in together, in the hope of yoking the wild bulls.

One king, who had won many battles and thought he was the strongest man to enter the contest, walked boldly towards one of the wild bulls. The bull charged at him with great force. He was tossed, and he fell to the ground. The bull followed him but the brave man got up and ran for his life.

A prince, one who had killed many wild animals, rushed at one of the bulls. The bull gored him and he fell down unconscious. Another prince approached a bull. But he then felt frightened and ran out of the field. The animal kicked one prince who tried to catch one of the bulls. He withdrew with a broken leg.

Everybody laughed when one of the kings caught the tail of a bull and the bull ran up and down, with the king dangling on its tail.

A prince tried to catch a bull by the horns; and soon he was seen flying through the air. The bulls trampled on one of the kings. Another king lost an eye; yet another lost an arm.

All the kings and princes tried their best. But none of them was able to catch the bulls and yoke them together.

The King of Khosla was very sad that the contest had failed. He ordered the bulls to be put back in their cages and taken away.

Suddenly, a new prince arrived in a chariot. It was Krishna, with Arjuna as his charioteer. Krishna wanted to try his luck in the contest to win Satya.

The King welcomed Krishna and told him about the terms of the contest. Krishna accepted these terms and entered the field. The defeated kings and princes looked on. 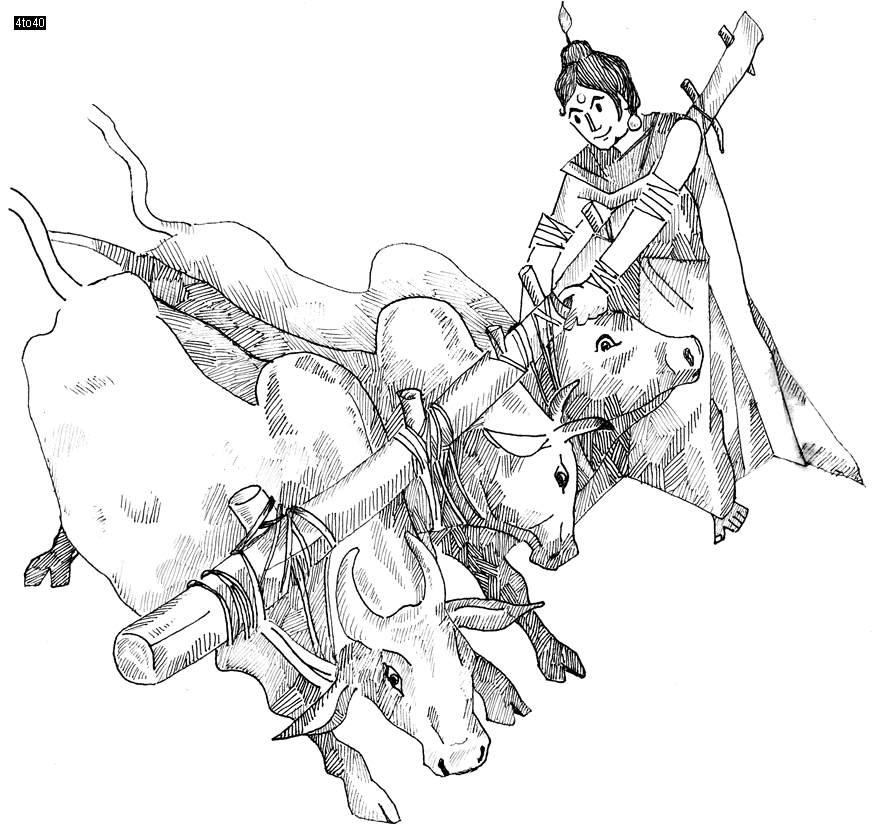 The wild bulls were all standing in a row, with their heads raised high, as if celebrating their victory. Then they saw another man walking boldly towards them. They stared at him; he stared at them. For the first time the bulls seemed frightened. Krishna was strong and clever. He knew how to tackle these wild animals. Slowly, he walked around, caught the bulls one by one, and firmly yoked them together.

The kings and princes were surprised. There were loud cheers for Krishna. The drummers, pipers, and buglers went into action with exciting loud music. The King of Khosla greeted Krishna. He placed Satya’s hand in Krishna’s. There was joy on all sides.

Then the defeated kings and princes raised an uproar. They were shocked that Krishna had won the contest and thus won the hand of Satya. They rose up in anger and cried: “Who is this Krishna? Is he not a cowherd? Is he not the one who killed his own uncle? How can kings and princes of noble birth allow one of their girls to be married to a mere cowherd?”

The kings and princes talked and talked, and shouted at the top of their voices. They said it was below their dignity to allow a cowherd to marry Princess Satya. They wanted to fight it out with Krishna.

Krishna and Arjuna were about to leave with Satya, when the challenge came. Krishna walked to the chariot, jumped into it, and sat there with Satya by his side. He then asked Arjuna to deal with the kings and princes who had declared war on him.

Arjuna went to them and pleaded for peace. He said that Krishna had won the princess in an open contest, by fair means. He appealed to them not to create unnecessary trouble. But the princes, in their disappointment and anger, would not listen to Arjuna. They wanted to fight.

“Then get ready,” said Arjuna. He took out his mighty bow ‘Gaiidivam’, and started shooting arrows that fell like a heavy shower on his foes. The princes shot back but they were no match for Arjuna.

Arjuna aimed his arrows in such a way that he did not kill anyone. His arrows hit the bows and arrows of his enemies, who were left without weapons to fight back. Still the princes wanted to continue the battle. Then Arjuna shot arrows, which destroyed the clothes worn by his enemies, leaving all the kings and princes quite naked on the battlefield.

In their shame, all the defeated kings and princes ran away.

Krishna then took leave of the King of Khosla and drove away with Satya by his side, and Arjuna as the charioteer. 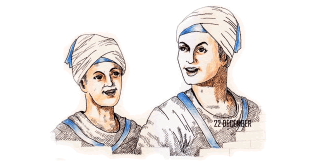 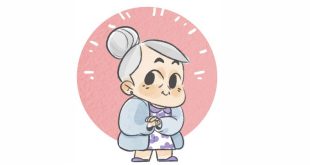 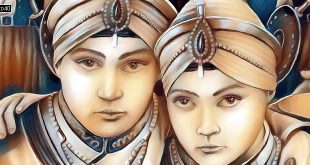