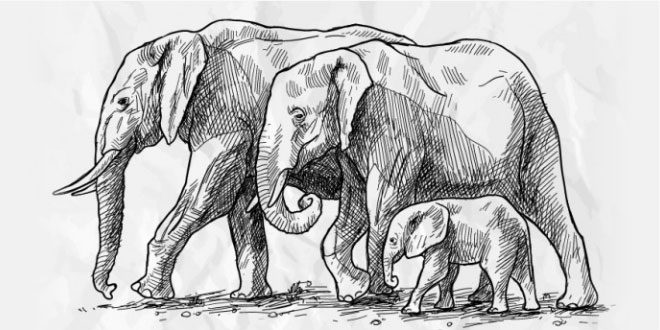 Elephant — Elephants (Elephantidae) are a family in the order Proboscidea in the class Mammalia. They were once classified along with other thick skinned animals in a now invalid order, Pachydermata. There are three living species: the African Bush Elephant, the African Forest Elephant (until recently known collectively as the African Elephant), and the Asian Elephant (also known as the Indian Elephant). Other species have become extinct since the last ice age, which ended about 10,000 years ago, the Mammoth being the most well-known of these.

Elephants are mammals, and the largest land animals alive today. The elephant’s gestation period is 22 months, the longest of any land animal. At birth it is common for an elephant calf to weigh 120 kilograms (265 lb). An elephant may live as long as 70 years, sometimes longer. The largest elephant ever recorded was shot in Angola in 1956. This male weighed about 12,000 kg (26,400 lb), with a shoulder height of 4.2 m (13.8 ft), a metre (3 ft 4 in) taller than the average male African elephant. The smallest elephants, about the size of a calf or a large pig, were a prehistoric species that lived on the island of Crete during the Pleistocene epoch.

Elephants are symbols of wisdom in Asian cultures, and are famed for their memory and high intelligence, and are thought to be on par with cetaceans and hominids. Aristotle once said the elephant was “the beast which passeth all others in wit and mind.”

Elephants are increasingly threatened by human intrusion and poaching. Once numbering in the millions, the African elephant population has dwindled to between 470,000 and 690,000 individuals. The elephant is now a protected species worldwide, with restrictions in place on capture, domestic use, and trade in products such as ivory. Elephants generally have no natural predators, although lions may take calves and occasionally adults. In some areas, lions may regularly take to preying on elephants

Elephants are herbivores, spending 16 hours a day collecting plant food. Their diet is at least 50% grasses, supplemented with leaves, bamboo, twigs, bark, roots, and small amounts of fruits, seeds and flowers. Because elephants only digest 40% of what they eat, they have to make up for their digestive system’s lack of efficiency in volume. An adult elephant can consume 140-270 kg (300-600 lb) of food a day. 60% of that food leaves the elephant’s body undigested.

With a mass just over 5 kg (11 lb), elephant brains are larger than those of any land animal, and although the largest whales have body masses twentyfold those of a typical elephant, whale brains are barely twice the mass of an elephant’s. A wide variety of behavior, including those associated with grief, making music, art, altruism, allomothering, play, use of tools, compassion and self-awareness evidence a highly intelligent species on par with cetaceans and primates.

The largest areas in elephant brain are those responsible for hearing, smell and movement coordination, and a large portion of the brain has to do with trunk management and sensitivity.

Elephants communicate over long distances by producing and receiving low-frequency sound (infrasound), a sub-sonic rumbling, which can travel through the ground farther than sound travels through the air. This can be felt by the sensitive skin of an elephant’s feet and trunk, which pick up the resonant vibrations much as the flat skin on the head of a drum. To listen attentively, every member of the herd will lift one foreleg from the ground, and face the source of the sound, or often lay its trunk on the ground. The lifting presumably increases the ground contact and sensitivity of the remaining legs. This ability is thought also to aid their navigation by use of external sources of infrasound. Discovery of this new aspect of elephant social communication and perception came with breakthroughs in audio technology, which can pick up frequencies outside the range of the human ear. Pioneering research in elephant infrasound communication was done by Katy Payne, of the Elephant Listening Project, and is detailed in her book Silent Thunder. Though this research is still in its infancy, it is helping to solve many mysteries, such as how elephants can find distant potential mates, and how social groups are able to coordinate their movements over extensive range.