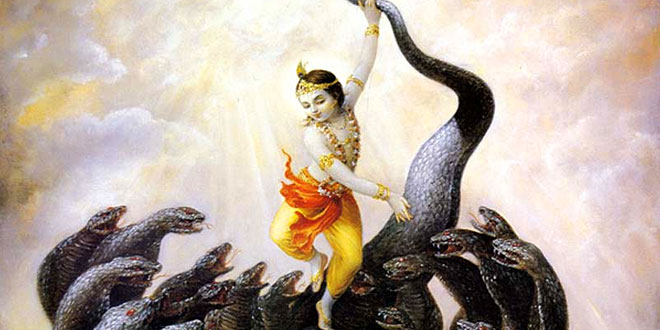 Krishna was the loveliest child in the world. He was dark and handsome. He wore pretty clothes and beautiful ornaments. His hair was tied in a knot on the top of his head. Always there was a peacock feather in it. Little Krishna was the darling of all the people.

Krishna’s childhood was full of fun and frolic. He had many friends. He went about the village and played with his friends. He was their leader. He led them into many adventures. He liked to play tricks on people, or make fun of them. His parents were sometimes annoyed at his pranks. But everybody liked him.

Krishna became a cowherd. He liked the cows and calves and the green fields in which they gazed. All the cowherds were his friends. Together they used to take the cattle out to the jungle in the morning and bring them back home in the evening. In the jungle there was plenty of grass and water for the cattle. The jungle was also an idea place where Krishna and his friends could play and make merry.

Krishna was fond of music. He could play very well on the flute. His music delighted all who heard it. In the jungle, Krishna would sit on the branch of a tree, or on a big rock and play his flute. The cowherds would sit on the grass and listen to the music. The cows and calves, too, would stop grazing and go near Krishna to hear his sweet music. Even the wild animals in the jungle became tame at the sound of Krishna’s flute.

At home, too, Krishna’s music attracted the people. Whenever he played the flute, men, women, and children stopped their work and ran to him. All the people loved Krishna.

Once, a huge snake named Kaliya went into the river Yamuna. It was to this river that the cows and cowherds went to drink.

Kaliya was a very poisonous snake. Soon, the river water became poisonous. Whoever drank the water from the Yamuna fell dead. All the fish in the river died because of the poison and began to float in the water. Crocodiles ran away from the poisoned water to the riverbank. There, they attacked the animals and damaged the crops. Even the trees on the riverbanks dried up. The snake became the deadly enemy of the land and the people.

Krishna heard of the poisonous snake. All the people were complaining about Kaliya. But everybody feared that snake. Little Krishna decided that he would punish Kaliya for his wickedness.

One day, Krishna went alone to the Yamuna in search of the big snake. He found that Kaliya lived in the deepest part of the river. Krishna jumped into the river and swam to Kaliya’s home.

Kaliya was annoyed at the little dark boy who tried to disturb him. He rushed at Krishna to kill him one with one stroke. But Krishna quickly moved up to the surface of the water. Kaliya followed him.

In a flash, Krishna got hold of Kaliyan’s huge head and stood on it. Krishna did not give the big snake a chance to bite him.

Kaliya then dived deep into the water. He wanted to drown Krishna. But Krishna was able to stay without breathing for as long as he wanted. Kaliya was forced to come up for a breath of air.

Kaliya was angry but helpless. Krishna stayed on Kaliya’s head. Then Krishna started kicking and stamping. Kaliya struggled hard to throw Krishna off.

With both hands Krishna held the two sides of the snake’s big head and kicked him as hard as he could.

Hundreds of frightened people gathered on the banks of the Yamuna. But Krishna seemed to be dancing happily on the deadly snake’s head.

Slowly, Kaliya began to lose strength. He was unable to bear the pain of Krishna’s attack.

Kaliya started vomiting poison and Krishna continued to kick him until all the poison came out.

Kaliya gave up the struggle. He knew his end was near. His only hope now was to seek Krishna’s mercy.

Kaliya prayed to Krishna. He begged Krishna to spare his life. He promised to do whatever Krishna wanted him to do.

Krishna heard the prayer. He released Kaliya from his grip. He ordered Kaliya to go far away, and not come back to the Yamuna.

Kaliya bowed his head. He quietly left the Yamuna.

The people cheered Krishna as he swam ashore.