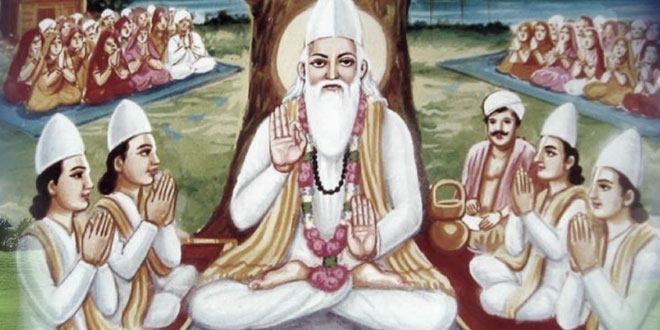 Kabir’s Ram: Sant Kabir Das Teachings & Belief – Kabir Das had faith in one God who is neither a man nor divine, neither a yogi nor a celibate. He has neither a mother nor a son. The extent of this type of god can not be known and he can not be con fined to a temple. He has no body and no blood. He is neither born nor dose he die. All the births and deaths are ordained by him. He can not be realized through love and devotion. Those who have realized him have been freed from birth and death. They have attained eternal bliss.

One day a Brahmin asked Kabir, “you advise people to recite the name of ‘Ram’ and I also repeat his name. Where lies the difference?” Kabir replied. “My Ram pervades the whole of universe while your Ram was one who was born in the house of Dasrath at Ayodhya and was next reincarnated as Krishna in Nand’s house. Union with my Ram can not be attained by wandering nude in the forest. If it was possible, the animals of the forest would all have found him. Nor can god be realized by the shaving the head close as the sheep, surely they would have been liberated if it were so. Celibacy is also not the means of liberation. Eunuchs would have seen the divine light if it were so. Nobody has attained the supreme state without devotion to his name. This repetition, penance, charity, good deeds, religious feasts, sacrifices, bathing at holy places etc. are fruitless unless you make your mind free of ego.”

Kabir was against idol-worship. He took the idol, the shopkeeper Dharam Dass was worshiping, threw it in the river and said to him, “This stone cannot be your god. The weights you weigh with are made of the same stone.” In the same way, he saw a flower girl plucking flowers for worship and said to her, “life abides in each petal you are plucking. Leaves, flowers and stems you are plucking are the three living gods. The sculptor pressed under his feet, the idol you are going to worship when he chiseled it. If there were life in it, it would have destroyed the sculptor. The rice and lentils you offer to the idol will be eaten by the priest. Only ashes will go into the mouth of the idol. O’ flower girl! You are deluded and so are the people but I am not. My god is ever living.”

One day, some mendicants came to Kabir. Kabir had no food to offer them at that time. He prayed to the lord thus, “No devotion for me is possible on empty stomach. Take this rosary of yours away. There can be no love between you and me if I have nothing to eat. If you do not give me yourself, I shall ask and get it. If I have these things, I shall engage myself in devotion with full faith. I have asked nothing out of greed. I have only asked for devotion to your name. Realization cannot be attained if mind is not satisfied.”