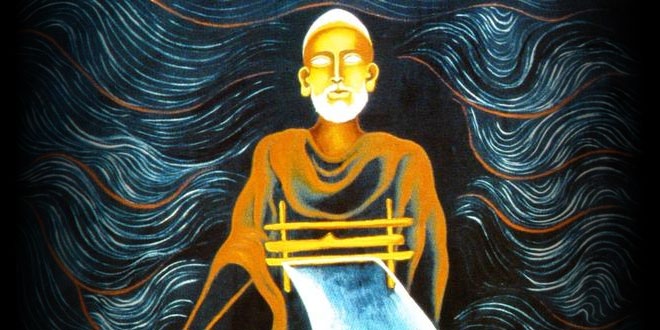 Sant Kabir was born in 1398 AD in Banaras city (also known as Varanasi – city in Uttar Pradesh). His father Neeru was a Muslim and weaver by profession. Banaras being a Hindu place of pilgrimage was always thronged by Sadhus. Those Sadhus had a profound effect on the life of Kabir. While playing with companions in childhood, he would often call ‘Ram Ram’ or ‘Hari Hari. Hindu children playing with him did not like a son of sinful Muslims chanting names of their gods and Muslim children were stopping him from uttering names of gods of infidels. He would reply in turn, “infidels are those who kill the innocent and steal”.

When Kabir’s parents noticed his tilt towards Hinduism, they decided to circumcise him to keeping with Muslim custom. Kabir said to the qazi who was to perform his circumcision, “If my circumcision is to done for the love of woman, I am not ready to accept this condition. If god wishes to make me a Muslim, he will circumcise me himself. If one become a Muslim by circumcision, what should we do about a woman? The better-half can not be left out, so it is better that I remain a Hindu. You should also give up blindly following your books and lean upon god who was created both the Hindus and the Muslims. At this reply, the qazi went away.

When Sant Kabir was in the initial stage of meditation, he used to rise early in the morning and bring a pitcher of water with which he would clean his face of meditation. After that he used to take his rosary and start reciting the name of the lord. Seeing this, his mother Neema told everybody, “From the day Kabir has taken up the rosary, our peace is gone. He has left his profession of weaving. Why has death not befallen those shaved-head mendicants who have ruined our house?” Kabir would tell his mother, “My master has given me the name of the lord which is the treasure of all joy. I have been saved since I have been blessed by his name.” On this type of answers, his parents asked him to live on his own.

Mendicants continued coming to Kabir as before in his new house. One day, Kabir’s wife, Loi seeing her son Kamaal and daughter Kamaali hungry, lamented “These close-shaved mendicants have spoiled our weaving work. They get bread to eat while we live on parched grain. They sleep on beds but we have to sleep on grass.” Hearing this, Kabir said to Loi, you are ignorant and have no mentor. If you take shelter with them, then only you will realize god.”

Kamaal’s wife came to the house after his marriage. Sant Kabir said, when he saw her with a veil on her face, “this veil will have no value at the time of reckoning. Your veil will only be real when you give up this modesty and go about your work dancing and singing the praises of god.” One day Kamaali was drawing water at the well. A Brahmin took water from her and asked, “Whose daughter are you?” The Brahmin regretted very much, having taken water at the hands of a weaver girl. Kamaali replied,” O, Brahmin! The water was impure even before I touched it because millions of living beings thrive in water. The clothes you are wearing have also been woven by a weaver.” The Brahmin had no answer.