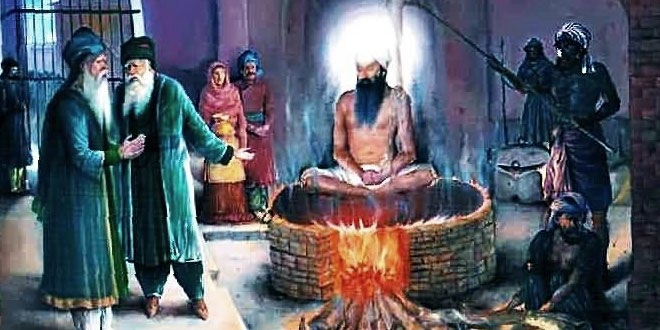 Martyrdom of Guru Arjan Dev: Unfortunately, Akbar died soon after and the struggle for the Delhi throne began between his son, Jahangir, and grandson, Khusro. Jahangir’s son, Khusro, had a lot of respect for the Guru. When he was defeated in the battle, he left for Punjab and sought refuge with the Guru in Amritsar. The Guru told Khusro clearly that his house gave shelter to people of all faiths and castes, but since his case involved a royal battle he could not shelter him as it was against his norms. Khusro understood the Guru’s statement clearly and respectfully took his leave. However, his forces had not even crossed Jhelum river when the royal Mughal forces surrounded them. Khusro was taken prisoner to Lahore, where he was put to death. The royal forces then began looking for those people who had lent a helping hand to Khusro.

Chandu Shah, who was still bitter about his experience with the Guru, saw this as a golden opportunity and began to incite Emperor Jahangir against him. He told the emperor that Guru Arjan had tried to help Khusro and that he had proof of it. Jahangir, meanwhile, had developed a strong hatred for the Guru since he attracted a large number of followers from all sections of the society. Sometimes the entire village bowed to him and this aroused Jahangir’s jealousy due to which he became vindictive. And so, even though he knew that the Guru had tried to explain to Khusro his policy of non-interference, he saw this as a good pretext for putting an end to the Guru’s activities. Thus he immediately ordered the Guru to be arrested, and brought before him.

When the Guru received the emperor’s summons he knew what he had in mind. He called Hargobind and had him installed as the sixth Guru in the presence of permanent Sikhs. Entrusting the seat of the Guru to him, Bhai Budha applied the tilak on his forehead. Guru Arjan told Guru Hargobind that it was time for him to sacrifice his life for their religion. He was not in the least perturbed or frightened. There was a sense of pride glowing in his eyes, since he was glad that he was required to do what he had always preached and strongly believed in. He asked Guru Hargobind to do his best to continue the tradition of the Sikh Gurus. He explained to his son that the emperor was panicky because of the new awakening among the Sikhs, and that he had to sacrifice his life for the cause of his son was to arm himself fully and prepare for the struggle ahead, which was to be a long-drawn-out war against tyranny. The Guru then took leave of his Sikhs, and bidding farewell to his beloved city of Amritsar left for Lahore.

The emperor levied a fine of rupees two lakhs and asked the Guru to revise the Holy Granth, deleting all references to Islam and Hinduism contained in it. The Guru refused to pay the money since he considered the money to be the sacred trust of his Sikh community. As for the verses in the Holy Granth, he claimed that they were verses in praise of God and no one could change them. The emperor was on his way to Kashmir for a pleasure trip at that time, and he did not want anything to hamper it. So he asked Murtza Khan to deal with the Guru the way he considered best, and proceeded on his journey. Chandu Shah took his opportunity to poison Murtza Khan’s mind against the Guru.

When the Sikhs came to know of the fine, they started collecting funds immediately. But Guru Arjan forbade them to collect the money, since he had done no wrong. The Qazi then ordered the Guru to be tortured to death if he did not agree to delete the supposed derogatory references to Hinduism and Islam in the holy book. For five days Guru Arjan was tortured. He was made to sit on a red hot iron sheet and they also poured burning hot sand over his body. He was told to take a dip in boiling water. Mian Mir, the revered fakir, came to Guru Arjan Dev and asked him for permission to punish all those men by his magic powers, but the Guru asked him to have patience and not go against the will of God. Chandu Shah’s daughter, on hearing of the torture being inflicted on the Guru, bribed the jailer and took some delicacies to the Guru. She begged his forgiveness tearfully. Guru Arjan Dev refused to take anything from Chandu Shah’s house but blessed the lady for her kindness and thoughtfulness.

When the tyrants found that the Guru bore everything with courage and without flinching they did not know what else to do. One day, the Guru asked permission to take a bath in the river Ravi, by the side of the Mughal fort in which he was imprisoned. Thousands of his followers watched the Guru walk to the river with tears in their eyes. His bare body was full of blisters and he could not even walk properly due to sore feet. Standing by the river the Guru kept saying that such was the will of God the gift of whose Name, he always sought. Then he waved to the vast bewailing multitude and walked into the river as serene and calm as ever. This was the last his disciples saw of him. He never came out of the water. It was May 30, 1606, and the Guru was only forty-three years old at that time. Accepting the will of God, Guru Arjan gave up his life suffering inhuman atrocities.