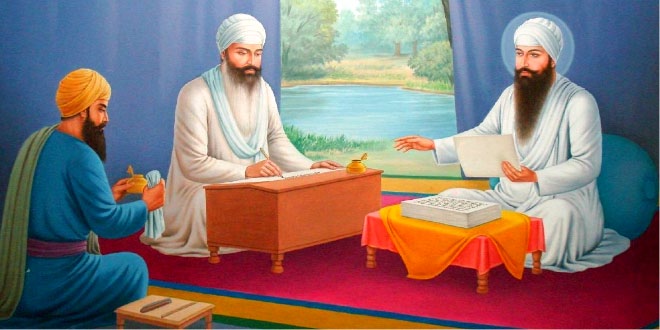 Guru Arjan Dev: The Conspiracy Begins – Before long, Guru Arjan came to hear of something that really troubled him. He learned that his brother, Prithi Chand, was composing his own hymns and passing them off as compositions of Guru Nanak and other Sikh Gurus. Guru Arjan feared that if this continued, the Sikh religion would be undone and grossly misinterpreted. He decided to take immediate steps to curb this dangerous situation as this threatened the very existence of the Sikh religion. He immediately sent his trusted Sikhs like Bhai Piara and others throughout the country while he personally went to Goindwal, Khadur and Kartarpur to collect the authentic texts of the Bani of the Guru preceding him. He was helped by Mohan, Datu and Sri Chand in accomplishing this. He then had a special camp set up by the side of Ramsar tank where he started compiling the Adi Granth for the guidance of his devotees. The Granth included the Gurus, besides a selection of the compositions of the poet – saints from all parts of northern India, both Muslims and Hindus, of all castes and creeds. The hymns were arranged by the Guru under the specific musical measure or ‘raga’ in which they were originally written by the Gurus, in a chronological order. The compilation of the holy Granth was completed in 1604.

However, on the completion of the Hari Mandir the question as to whose idol should be installed in this temple sprang up. Since all Sikh Gurus were the exponents of Lord Almighty’s formless existence, they thought that there should be no idol at all. Guru Arjan Dev then called an assembly of holy men consisting of Bhai Budha and his three colleagues and asked their opinion about the installation of the idol. They were of the opinion that no idol was needed since all their Gurus had openly and unanimously declared that God is infinite, formless and without any beginning or end. As God was omniscient, they considered it sacrilegious to limit the infinite form and install his idol.

After hearing their opinion Guru Arjan Dev suggested that they could install their Pothi Saheb in place of an idol, which he believed would inspire people constantly to lead an ideal and pure life. He saw it as the best means to direct people on the path of righteousness. The suggestion was approved and applauded by everyone including Bhai Budha, and so in the year 1604 the Pothi Saheb was installed in the Hari Mandir (the Golden Temple at Amritsar). This book later came to be known as the Guru Granth Saheb.

The hymns included in the Granth were of a highly poetical order but in a simple language so that even the illiterate peasantry could understand it clearly. Soon it became the most powerful weapon in spreading the teachings of the Gurus throughout the country. The institution of Masands or the preachers was established by the Granth. This became very popular and flourished under the Guru’s patronage. The Guru provided them with free nations and other necessities so that they could devote themselves completely to the work of spreading the true religion, without any distractions. People in large groups began to reach Amritsar to have darshan of the Pothi Saheb. This caused a lot of distress to the orthodox Hindus and Muslims. They went to Emperor Akbar with their complaints. However, the emperor’s policy was usually that of religious tolerance and liberalism. He paid no heed to the complaints of these laymen. He announced clearly that their policy was that of non-interference and he expected this from people of all faiths.

Things were going on smoothly for a while till the appearance of Chandu Shah on the scene. He was a Hindu banker from Delhi who wielded a lot of influence at the Mughal court. He had a daughter of marriageable age, and so he was on the lookout for a groom for her. Since he was originally from Punjab, he wanted his son-in-law to be a Punjabi. He sent his emissaries all over Punjab to find an eligible match for her, but they found none who suited Chandu Shah’s requirement. Eventually, on their way back they visited Amritsar and saw Hargobind, the son of Guru Arjan Dev. The agents heaved a sigh of relief and hastened to Delhi to inform Chandu Shah about the boy. Chandu Shah, however, was a man with an inflated ego, who could not imagine giving his daughter to anyone who was below his standards in any way. And so he rejected Hargobind’s proposal on the ground that his family lived on offerings and had no tangible social or political position. The proposal was thus dropped and forgotten but not before Guru Arjan Dev heard about it. Some Sikhs came to know of Chandu Shah’s remarks and conveyed it to the Guru. At that time the Guru kept silent since he knew the time was not right to retaliate. However, Chandu Shah’s agents kept searching everywhere and were unable to find anyone better then Hargobind.

Time was passing quickly and his daughter was unable to get married. Her mother was really worried and tried to convince Chandu Shah that there was no better match for their daughter than Guru Arjan Dev’s son. She implored him to renew the proposal. Chandu Shah also realized his mistake and he sent his agents to the Guru immediately to finalize the proposal. But when the agents reached Amritsar, the Guru turned down the proposal. He repeated the words of Chandu Shah and told his agents that the daughter of a such a rich man like Chandu Shah could not fit into the house of a poor person “who lived on offerings alone”. When Chandu Shah heard of it, he was furious and shocked. He could not imagine how anyone, not even the Guru, could turn down the offer. In his fury, he decided to avenge himself on the Guru for the extreme insult hurled at him.

Guru Arjan Dev: The Conspiracy Begins – He did not have to wait for long for an opportunity. Prithi Chand, the Guru’s elder brother, who was still bitter about the Guru complained to Chandu Shah that the holy Granth compiled by Guru Arjan Dev contained many derogatory remarks and references to Muslim and Hindu prophets and saints. When Chandu Shah heard of it, he decided to use this as his weapon. He immediately sought the Mughal Emperor’s audience and made him aware of the complaints and rumors being circulated about the Guru.

When Akbar received more and more complaints including that of the Mughal courtier Chandu Shah, he decided to look into the matter. So he ordered that the Guru and the holy Granth be brought before him. Guru Arjan Dev sent Bhai Budha and Bhai Gurdas to the Mughal court with a copy of the Holy Granth.

Akbar had met most of the Gurus and he held them in great esteem. But since so much was being said of the Holy Granth, he asked Bhai Budha to read it out to him. However, on hearing it he found the complaints to be absolutely baseless and unfounded. He had always looked upon the Sikh Gurus as social reformers and believers in the unity of God and the brotherhood of man. And all this was close to his heart. In fact, Pothi Saheb’s very first verse convinced the Mughal Emperor about the baseless charges levied by religious bigots out of sheer jealousy and malice towards Guru Arjan Dev. He criticized them publicly and began to ponder over the verses in the holy book. He asked for the glorious words from the Holy Granth to be read to him again, and this time too he was delighted to listen to the hymns. Each was more nobly inspired than the earlier piece. Far from finding anything that could be construed as maligning anyone, he felt that the hymns inculcated love and devotion and strove to rid both the Hindus and the Muslims of the communalism that was tearing them apart. He was surprised to realize that this was exactly what he had wished to project through Din-i-Ilahi – a religious that combined values of both the prevailing religions. The king was happy to be acquainted with the highly inspiring volume compiled by the Guru.

He was so taken in by the intense and rich meaning enshrined in the verses, that he resolved to have Guru Arjan Dev’s darshan as soon as possible. He then declared that there was nothing objectionable in the holy book, and he pleased with the noble work that the Guru was doing. Not only that, he also offered financial help if the need arose. He was really happy to be acquainted with the highly inspiring volume compiled by the Guru. He bestowed robes of honour on the Guru along with numerous gifts. He also promised to pay his respects to him personally.

The emperor kept his promise and came on a pilgrimage to Amritsar. He was greatly impressed with the activities of the Guru. He made rich offerings and sought his blessings for the peace and welfare of the kingdom. At the Guru’s request the king also waived the revenue due from the peasants of Punjab as they had suffered a severe drought that year. When the cultivators came to know of this, they were deeply grateful to the Guru.