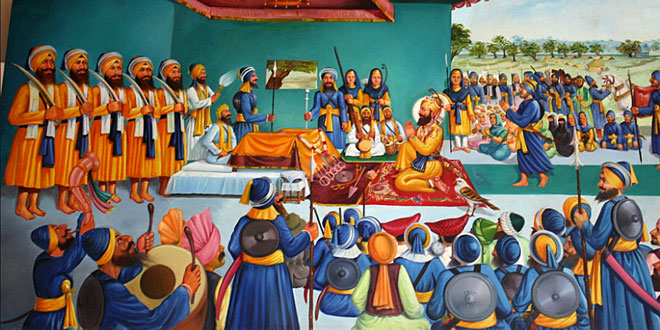 Tenth Sikh Guru: Guru Gobind Singh, the tenth Nanak (Sikh Guru), was born at Patna, Bihar, India on December 22, 1666, (Poh Sudi Saptmi). His birthday generally falls in December or January or sometimes twice within a year as it is calculated according to Hindu Bikrami Calendar, which is based on the lunar calendar. According to the Nanakshahi Calendar, the birthday of Guru Gobind Singh Sahib falls annually on January 5.

In 1699, He dramatically initiated five men from the lower castes as His Five Beloveds, blessing them with great courage as well as nearness to God. They became models for the Khalsa, the Order of the Pure, which Guru Gobind Singh created to stand on the front line against injustice. The Khalsa were held to a very strict moral and spiritual discipline and under Guru Gobind Singh’s courageous inspiration, helped to turn the tide against Mughal oppression in India.

In addition to his spiritual and military leadership, Guru Gobind Singh was a gifted intellectual and had many poets in his court. He was inspired to write many powerful spiritual compositions that infused a martial spirit in the people.

This included the Jaap Sahib, but He did not include them in the Sikh scripture, the Guru Granth Sahib. His writings have instead been collected in a separate volume, called the Dasam Granth. Upon His passing away, He instructed his Sikhs to regard the Guru Granth Sahib as their teacher. ‘Granth’ literally means ‘volume’ (especially, a Holy volume). ‘Sahib’ is a term of reverence used for anything sacred. The Guru Granth Sahib is the perpetual guru of the Sikhs today.

The prasad of Ugadi / Gudi Padwa is the bitter leaves of the neem tree with jaggery. There are special foods prepared for this festival. In the southern states, puligore – a sour tamarind rice dish, bobbatlu, holige – sweet stuffed bread and Ugadi Pachadi made of jaggery, raw mango pieces, neem flowers and tamarind is prepared. In Maharashtra, shrikhand – a fragrant yogurt dessert, with poori – a fried puffy bread is prepared.