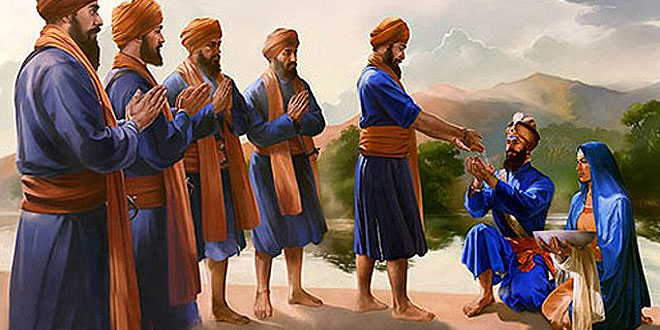 Guru Gobind Singh: The New Panth in Sikhism – Khalsa – Guru Gobind Singh wanted to create a caste-less society. Therefore in the year 1699 he sent out invitations to all the Sikhs to gather for special meeting on Baisakhi Day. After the morning Prayers he got up, and addressed them. He told them that the Goddess of Power wanted head of a brave Soldier. He asked one of his soldiers to come forward. After a moment’s silence, a man named “Dayaram”, a khatri of Lahore (now in Pakistan), offered himself for the sacrifice. Guru Gobind Singh then went with him inside his tent and when he came back his sword had drops of blood dripping from it.

He again asked for a soldier for sacrifice and this time a man called “Jat Bhai Dharamdas” offered his head. Guru Gobind Singh ji repeated this three more times and Bhai Mohan Chand from Dwarka, Bhai Saheb Chand from Bidas and Bhai Himmat Chand from Jasan Nath offered their heads to Guru.

When the Guru entered the camp for sixth time the crowd was surprised to see him return with five disciples. They then realized that Guru Gobind Singh ji was only testing their courage. The whole crowd ecstatically shouted slogans in honour of the Guru. Guru Gobind Singh then embraced all the five men and said that they were Panj Pyare or his five beloved men.

On that day Guru Gobind Singh announced a new Panth altogether, by the name of “Khalsa”. Khalsa means Pure this Panth was to unite all its members by the bond of purity and eliminate all distinctions of high and low, rich and poor. He further ordained that the disciples of his Panth must imbibe amrit (holy water) and lead a simple and pure life. He said that any person who partakes of this amrit would change from a Jackal to a Lion, from a Sparrow to a Hawk. He also added that people from all castes were welcome to take the amrit provided they gave up and forget their previous caste forever, since his purpose was to combine them all into one brotherhood, the Khalsa.

He then demonstrated to everyone present, how amrit was to be made. He took fresh clean water in a vessel to steel. He knelt beside it like a soldier and asked five beloved men to stand before him in a semi circle. They were told to fix their eyes on the Guru and their minds on the God. He then asked them to stir the water in the steel vessel with a Khande or two edge sword, while he recited the sacred verses of gurbani which he had selected for the ceremony. Then to show what wonderful Power the amrit possessed he put some of it aside for the birds to drink. Just then two sparrows came there and sipped it. Then they flew to a distance and suddenly started to fight fiercely like two kings fighting for a kingdom. Each was bent upon killing the other. They continued fighting till both were dead. Then, turning to his Sikhs, he told them that they too will become fierce, brave and warrior like on partaking of the amrit.

Seeing this, a Sikh went to the Guru’s wife Mata Jito ji and informed her of the amrit which the Guru had prepared and its effect on the two sparrows. When Mata Jito ji heard this she decided to go and sweeten the amrit. She bought some sweet s called Patashas and took them to the Guru. He was very pleased to see what she had brought. He then explained that the amrit which he had prepared was going to produce brave, fearless, courageous and just men and though these qualities were going to be very useful and important in the times to come these could also prove dangerous and harmful. The sweets brought by the Mata Jito ji would combine it with peace, a loving nature and sweet temper. He then asked her to pour the sweets in the amrit so that the Sikhs could be brave, strong, and fearless like Lions and yet possess a sweet nature. He then baptized his five beloved men and asked them to drink from same vessel, which shocked many and pleased the others. He then added “Singh” to their names and said that thereafter all Sikhs must have the suffix “Singh” attached to their names. The crowd cheered at this announcement since Singh meant a lion, thus eliminating all differences between them and putting an end to any inferiority complex.

He then told the gathered Sikhs that they should carry arms for the defense of their Principles, their faith and their country. They should never show back to their enemy in the battle. They should live and act according to the Three Golden Rules laid down by Guru Nanak Dev Ji. He asked them to help the poor and the needy and protect the weak. They should give up their previous castes and accept only one caste, the Khalsa. They were not to indulge in drinks or any other intoxication. To strengthen the unity he chalked out five essentials for a true Sikh which would not only unite them but also give them distinct identity. These five things were Kesh (uncut hair), Kaacha (long underwear), Kangha (Comb) Karha (thick bangle) and Kirpan (small dagger).

After this, he asked his five beloved men to prepare the amrit as he had done. Then he requested them to baptize him as he had done them. When the astonished men hesitated, he told them that having been baptized and having partaken the amrit from the same vessel they were no more his disciples. He asked to be made a ‘Singh’ too by baptism. The beloved men obliged and baptized him in the same manner. Then the Guru formally declared that his name would be Gobind Singh.

And thus was born the new Panth of the Khalsa – a nation of saint – soldiers, who worshiped one God, who were friends and servants of man, and enemies of all tyrants-all equal in all respects. Thus Khalsa was Guru Gobind Singh’s ideal state of man-brave, fearless, strong as a lion, yet sweet, humble and loving.

He gave numerous instructions to his disciples, and the people felt a new awakening in their dormant minds. Men who had either lived as slaves of so called upper castes or in fear of tyrants were now converted into brave warriors under the Guru’s leadership. They were ready to give up their lives for their Guru without a moment’s hesitation or fear. Guru Gobind Singh Ji thus put life into Sikhs and gave them a strong powerful personality.