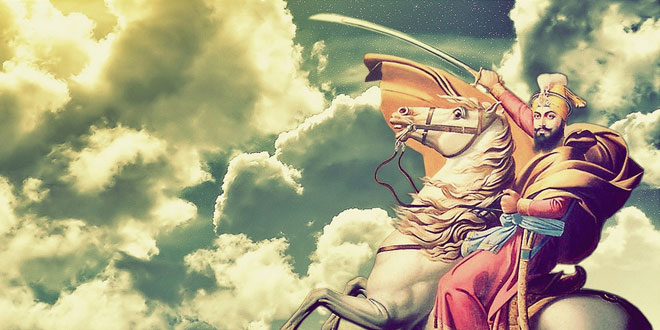 Guru Gobind Singh was born on Sudi 7 in the month of Poh in the year 1723 of the Vikram Samvat (SV) calendar which corresponds to December 22, 1666 of the Julian Calendar. When converted to the modern Gregorian calendar, Guru Gobind Singh‘s birth took place on January 5, 1666 A.D.

This to corresponds to the Nanakshahi Sikhism calendar, as 23 Poh. However in 2010 the Nanakshahi calendar underwent controversial modifications to align with the ever fluctuating Vikram Samvat calendar. Accordingly, Guru Gobind Singh’s birthday or prakash gurpurab is calculated to be observed on January 09 (Sunday) in 2022.

Birth of a Star

A splendid Divine Light shone in the darkness of the night. Pir Bhikan Shah a Muslim mystic performed his prayers in that Easterly direction (instead of towards the West, contrary to his daily practice), and guided by this Divine Light, he travelled with a group of his followers until he reached Patna Sahib in Bihar.

It was here that Gobind Rai was born to Mata Gujri in 1666. It is said that Pir Bhikan Shah approached the child and offered two bowls of milk and water, signifying both the great religions of Hinduism and Islam. The child smiled and placed his hands on both bowls. The Pir bowed in utter humility and reverence to the new Prophet of all humanity.

Gobind Rai was born with a holy mission of which he tells us in his autobiography “Bachitar Natak” (Wonderous Drama). In it Guru Ji tells us how and for what purpose he was sent into this world by God. He states that before he came into this world, as a free spirit he was engaged in meditation in the seven peaked Hemkunt mountain. Having merged with God and having become One with the Unmanifest and the Infinite, God commanded him:

“I have cherished thee as my Son, and created thee to establish a religion and restrain the world from senseless acts. I stood up, folded my hands, bowed my head and replied, ‘Thy religion will prevail in all the world, when it has Thy support’.”

Guru Ji describes the purpose of his coming to this world and why he emerged from the Supreme Reality in human form to carry out his Creator’s command :

“For this purpose was I born, let all virtuous people understand. I was born to advance righteousness, to emancipate the good, and to destroy all evil-doers root and branch.”