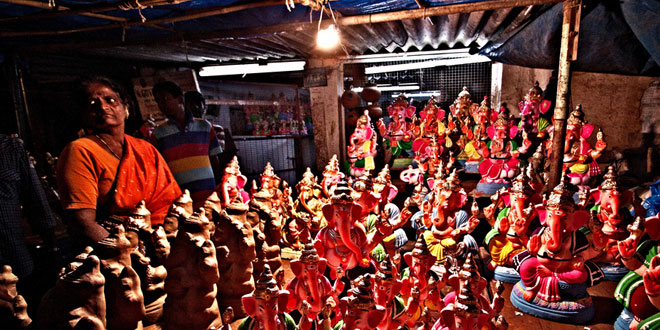 Not a God of small things: Lord Ganesha

Not a God of small things: Ganesha Habba inundates us with nostalgia. A kaleidoscope of images, colors, objects, people and happiness gets hazy – perhaps from the air that is thick with smoke emanated from endless queues of vehicles? Why do we want to be able to feel the texture of the jhari langa we wore as children? Why does the taste of karigadabu that ajji made tirelessly for God, family, and endless guests, hang on in some corner of our memories?

Passing through the nerve centres of South and North Bangalore, where the festival is still big and retains some charm of the yesteryear, you now see a whole new range of the friendly god. When the Kargil war happened, Ganesha came wielding a gun. When Sachin Tendulkar became the cricketing sensation, he sported a bat. Then again, to appease kids, he’s all dressed like Spiderman, waiting to fly over rooftops. The eco-conscious Ganesha has shed his layers of paint and gone back to all basic, all clay. The changing appearance of the God perhaps coincided with the changing nature of the festival.

Not a God of small things: Lord Ganesha

From making elaborate tindis at home, starting much ahead of the festival, we’ve moved on to eating out at restaurants that promise homely festive spreads. Even at home, the health conscious are weary of making too many fried or sweet foods, tradition and nostalgia notwithstanding. No more elaborate rituals spread over five days. It’s Ganesha-come-Ganesha-go, depending on how much time you have on hand to spare for the Gods.

Prateek Mukunda, a 25-year-old software engineer says that the general enthusiasm for the festival is no longer there like before. “That whole dedication and drive, I don’t have it now, and I don’t know why. As kids, we would compete with each other in the colony about seeing 21 Ganeshas. It was a celebratory mood. Now, I’ve lost interest in rituals. But I listen to good music, maybe some bhavageethe, or watch movies. Festivals have become more about a time for yourself, to indulge in other activities.”

We can still feel our faces lighting up with glee when the kobri-sakkare mixture was dropped into our palms when we went from house to house in the neighbourhood asking, “Ganesha koorsidiraa ree? (Is there a Ganesha in your house?)” Nothing stopped us from breaking into a dance or a shloka that we were taught in school – we behaved like we were descendents of Mirabai, soaked in bhakti and lost to the world around us. Sixty-four-year-old Bharathi Prasad points out how today it’s all about using “readymade” things in the festival, and how it’s no longer a group activity. “As kids growing up in a joint family in the 60s, we would all get together and make a mantapa for Ganesha by upturning a chair on a table. Today, we even buy readymade pasted rangolis. My mother and aunt would make holige and kadabu at home, but now we mostly get it made-to-order from outside.” But she has fond memories of the festival – having a quick headbath, wearing jhari-langa and kuchchu and setting out with friends to see as many Ganeshas as possible. “At each house we visited, they would keep something wrapped in paper packets for us to take back. The greatest excitement would be to come back home and unwrap them and find kodubale, karigadabu!” And then there was the rule that you shouldn’t see the moon, “So we would all hang our heads in the evening and walk about in fear of seeing the moon!”

As we race through our hectic everydayness, totally consumed by the city, Ganesha habba no longer wears the charm of childhood. There is no time to make phalavastra (the string of fruits), surely no time to make karigadabu (amma’s recipe is safely tucked into the diary), and absolutely no energy to invite neighbours. After we set Ganesha asail in our little tubs, ajja told us not to open the lid, lest Ganesha loses his way to his grandfather’s house – we believed. In the age of belief, our Ganeshas were humble, our celebration inclusive. Today, in the age of sceptics, our Ganesha’s are overdressed; he even has to wear other costumes so that we notice him.

M. Sreedhara Murthy, professor of psychology at NMKRV College, who’s lived all his life in the city’s traditional Chamarajapete area, rues that the whole subtlety of the festival is gone. “It’s all a marketisation – it starts with festival sales and discounts.” The blocking of roads for functions, inviting Bollywood singers for shows, and a great value placed on spectacle and performance are some of the “devastating changes” he sees. “ There’s a celebrity-driven consciousness that is enveloping our society. There’s an aggression in celebration. In our days the cultural shows included Bayalaata, Yakshagana, magic shows…”

Amma doesn’t complain; she wears the same selflessness that grandmother did and moves between the kitchen and puja room. As we laze under amma’s generosity, it’s time to indulge in nostalgia.