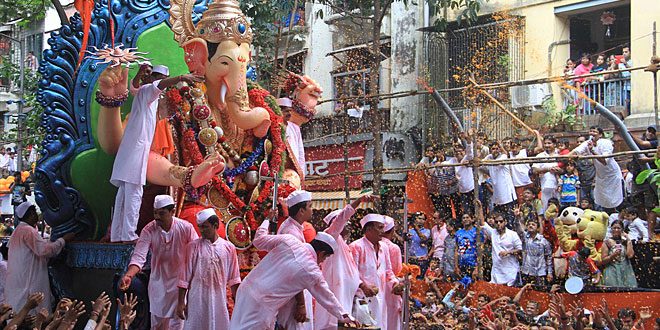 The Grinch who stole Ganesh Chaturthi

The Grinch who stole Ganesh Chaturthi: It’s 6 a.m. and the city is slowly stirring from its slumber. The roads are empty except for a few RTC buses crawling along. Away from the main road in Tarnaka, in one of the narrow lanes there is some unusual activity and a lot of noise. A group of boys are milling about a small truck. A five-foot tall Ganesha idol with its face covered is mounted on it. Young boys and teenagers in the group are talking excitedly while sitting precariously on the edge of the truck, leaving their feet to dangle. One of them excitedly says, “We brought it from the idol makers and we are responsible for guarding it, till it’s placed in the pandal.” It’s evident from their looks that they are mighty proud of their assigned responsibility. 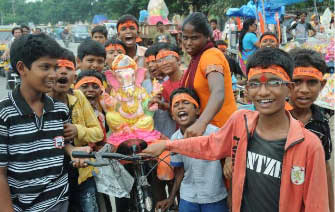 In fact, most of the colony Ganesh Chaturthi celebrations depend on the shoulders of young boys like these. From collecting chanda (donation) to getting the idol, arranging for the prasad and playing the latest chart-busters at all times of the day, they take their responsibilities with great gusto. May be it’s a strategy of some sort but the youngest ones of the lot are often employed for money collection. With their bright smiles and blandishing words, they are successful in guilt-tripping and before you realize it, you are taking out a Rs. 500 note to make a contribution for the colony puja and hoping they will remember to give you some of the tamarind rice.

It’s not just the big pandals but Ganesh Chaturthi is celebrated with equal revelry even in small colonies and apartment complexes. Though the festival gives an opportunity for the colony and apartment residents to bond, sometimes it becomes a task when the festival is forced on you.

“I am forced to give money for my apartment celebrations and the one near my office,” complains Radhika, a media professional. “I am not against any kind of celebrations but everyone asks for a lot of money and I don’t even get to attend any of it because of the nature of my work,” she adds.

Apart from the colony festivities, most of the apartment complexes also have their own Ganesh celebrations. They feel that it is the only time of the year that the entire complex gets together. Therefore, the pressure to participate is equally high. “I have to pay Rs. 1000 for the festivities whether I participate or not. Otherwise there will be a lot of resentment among the other flat occupants,” says Amitava, an MNC employee and he is definitely not keen on facing the ire of the Almighty. He adds the pressure doesn’t end with the money but you also have to come up with a very good excuse as to why you are not participating. For the amount of money that is pumped in even for a small apartment puja, it is a wonder as to why they don’t think of investing the money in rain water harvesting. After all, doesn’t God help those who help themselves?

If you don’t want to be labelled as the ‘Scrooge’ of Ganesh festivals then it is advisable to show up once in a while for the apartment. Even if the loud music and noise of the crackers bothers you, grin and bear with it for the sake of collective joy. Channelize your energies towards the festival food that is usually served; if not that then the community lunches and dinners ought to make you one with the ongoing festivities.